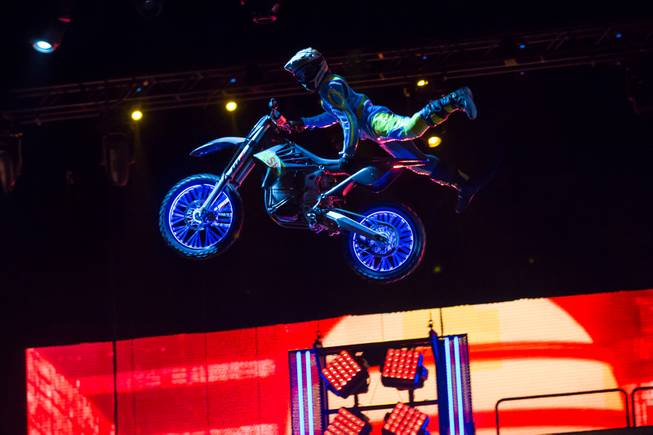 Cirque du Soleil hosts invited guests and media during a preview of its new show “R.U.N” at the Luxor, Tuesday, Oct. 22, 2019.

Cirque du Soleil and Luxor offered the first real look at new resident show “R.U.N” to a select group of guests and members of the media Tuesday afternoon, making good on the promise of a new action-packed direction for Cirque by performing two exciting acts from the show ahead of its opening night on Thursday.

“If you’re expecting to see our trademark acrobatics in a dream-like, impressionist world, you’re in the wrong place,” said show producer Gabriel Pinkstone before introducing a wild performance simulating a car chase across the Nevada desert. “’R.U.N’ is going somewhere completely different. We’re drawing on a profound expertise in human performance and spectacular stagecraft, but ‘R.U.N’ is exploring new territories. We like to joke that ‘R.U.N’ is what happens when the stunt people send the acrobats out for coffee and then lock the doors behind them.”

She described the new show as a celebration of the action-thriller genre as popularized in movies, graphic novels and video games. But while there may be plenty of action in other Cirque productions on the Las Vegas Strip, the framework and esthetic of “R.U.N” is something new and different. Stunt work is the core of each performance, which include riding electric motorcycles, high falls, combat, pyrotechnics and special effects, set against the backdrop of a fictionalized, amped-up version of Las Vegas itself.

Tuesday’s sneak peek also displayed innovative technologies at play in the production. As fighters jumped on top of the “moving” vehicle during the car chase to attack its inhabitants, projections on screens behind and in front of the action added depth and motion to the scene and more scenery was splashed across two huge projection surfaces stretching along the theater’s walls. “R.U.N” integrates extensive live footage and pre-shot video on those vast surfaces, helping to create a more immersive experience.

It’s all part of the show’s approach to storytelling, which was crafted in a completely different way by Cirque du Soleil.

“In a more traditional Cirque show you would start with an acrobatic skeleton of the show, where you have a lineup of the different acts you’re looking to show,” said creation director Stefan Miljevic, who also directed the film sequences in the show. “We started the notion of a story, of following a hero on his quest up until its resolution. The idea was to find a way to integrate the performances so they can fuel the story. That was a new way of thinking [for Cirque].”

The show’s creators took inspiration from classic graphic novels and highly stylized action films like “V for Vendetta,” “300” and especially “Sin City,” which led to a connection with one of that film’s directors, Robert Rodriguez, who ended up writing the story for “R.U.N.” Composer Tyler Bates, who created music for “300” and other popular action and horror films, crafted an original score and adapted existing music to create a hybrid electronic-rock sound for “R.U.N.”

The second scene unveiled Tuesday occurs late in the show, a motorcycle stunt spectacular that sets the tone for the final confrontation between “The Hero” and “The Groom.” Teams of bikers roamed the theater’s aisles before swooping across the stage, defying gravity by sliding up steep ramps and blasting over the stage and performing motocross competition-style stunts.

“We really were given permission to break the mold,” Schwandt said. “Taking an opportunity like this with a company that has such a strong performance history and being asked to break the rules and try something new is an amazing opportunity and has been super exciting for us.”

“R.U.N” makes its debut at 7 p.m. October 24 and will eventually settle into a regular performance schedule at 7 and 9:30 p.m. Wednesday through Sunday at Luxor. The world premiere grand opening is scheduled for November 14. More information can be found at cirquedusoleil.com.