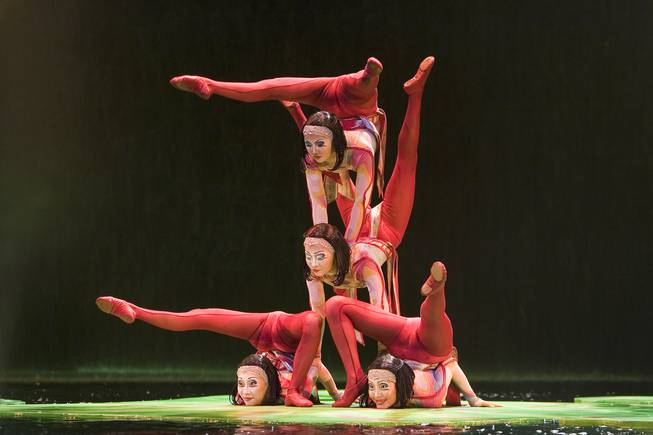 Contortionists are just one of many memorable acts in “O,” now playing nightly at Bellagio.

Cirque du Soleil’s landmark production “O” at Bellagio has already shifted to a seven-night schedule. The show announced the change in the fall and planned to perform every night starting in January, a first for the 21-year-old production, but recently made the adjustment ahead of schedule.

It’s a big deal for “O,” which passed the 10,000 show mark on Sept. 1 and is certainly one of the most popular and successful productions in the history of the Las Vegas Strip. Here’s a look at some of the numbers behind the aquatic spectacular at Bellagio.

3.5  The number of minutes a fire artist is literally on fire while sitting in his chair during every performance of “O.” The schedule expansion required the hiring of a second fire artist, marking the first time anyone other than the original artist, Ray Wold, has performed the act.

14  The number of underwater technicians working during the show, helping the performing artists and handling props.

400  The minimum number of pairs of swim goggles held in backup for all the show’s swimmers.

7  The number of hydraulic lifts used behind the scenes during the show. Each lift can move independently to create a conventional stage or many other configurations that reshape the surface of the water. Each lift has a 100,000-pound weight capacity and moves at four inches per second.

40  The height in feet where the Bateau apparatus hangs above the pool stage. The Bateau is not motorized, it is propelled and controlled by the 12 acrobatic artists that perform during one of the most memorable acts of “O.”

60  The height in feet of the high dive perch, from which performers plunge into a 17-foot-deep triangular section of the pool stage.

4  The number of microclimates in the O Theater. The stage and pool are kept warm while the audience seating area is maintained at 72 degrees. There are two distinct climates in each of the musicians’ booths on opposite sides of the stage.

5  The average number of costume changes for each performer in “O.” There are three to five copies of each costume, adding up to thousands of pieces, wigs, masks and more.

37  The number of wardrobe technicians now needed to achieve a seven-day show schedule.

26  The number of underwater speakers that allow performers to hear the music and specific cues or instructions while in the pool.