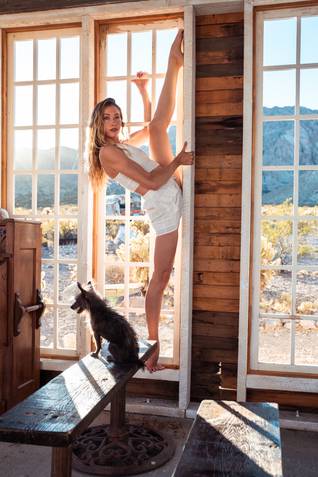 Lucia Carbines has been performing in “Absinthe” and “Opium” for the last three years.

Lucia Carbines performs in “Absinthe” at Caesars Palace on October 28, 2020.

When popular comedic variety show “Absinthe” returned to live performances on October 28, it enabled a squadron of unique artists to get back onstage after more than seven months away from their theatrical careers. The diversity of performers is one of the most dynamic aspects of “Absinthe,” currently playing twice a night Wednesdays through Sundays at Caesars Palace.

Lucia Carbines, known for the “girl in a bubble” act, is unique even among Vegas acrobatic performers. When she was first discovered by the show’s production company Spiegelworld, the New Zealand native was 17 years old and performing a high-wire motorbike-trapeze stunt.

“My friend [Australian stunt rider] Phoenix Harrison would be riding the motorbike on a slackwire 42 meters in the air and I would be hanging off a trapeze underneath him, and the trapeze is what kept us on the wire,” Carbines says on the latest episode of the Sun on the Strip podcast.

She had already been performing for years as a dancer and musician and training at a small Australian circus academy when she began working with Spiegelworld and performing in its “Empire” production in New York and Los Angeles. Her natural ability as a contortionist is what sets her apart, extreme flexibility that can’t be taught.

“I never knew I had that flexibility. It wasn’t until circus school where we would all go through the same stretching routine and it just happened one day, doing a back bend. My coach was stretching my back and saying, ‘Just tell us when it hurts,’ and I just kept going and going and going until my butt was sitting on my head,” she says. “My biggest thing as a contortionist was learning how to stabilize and control. I don’t have to work on flexibility in my spine but I spend a lot of time doing pilates so I have the strength to control this flexibility. It’s just the muscular tension of holding an extreme pose like that, and breathing. When you turn yourself upside-down and squish yourself in half and go into these crazy poses, [breathing} is a lot more difficult.”