It didn’t take long for the Gazillionaire to make it ruthlessly, hilariously clear that Absinthe was back and just as wildly entertaining as ever.

Just minutes into Wednesday night’s reopening performance at the Spiegeltent at Caesars Palace—the first presentation of Absinthe in more than seven months—the rowdy host with the dirty mouth slipped right back into his penchant for comedic crowd work, taking aim at a woman in the audience who wasn’t following all the carefully installed safety protocols.

“Put your mask back on, bitch!” Gaz hollered from the distanced stage. “You’re not hot enough to not wear a mask.”

That might sound mean and aggressive, but it’s exactly the type of line for which the character is known, and it hit the tent like a lightning bolt. All 153 people in the audience were laughing through their face coverings, suddenly reassured that this particular Vegas show wasn’t going to pull any punches with its trademark irreverent comedy. The next 75 minutes showcased similarly passionate performances from Absinthe’s cast and crew, a remarkable feat after the long layoff and a strong statement that live entertainment can still flourish through the mandated restrictions and limited capacities placed on the Strip’s theaters and showrooms during the pandemic. 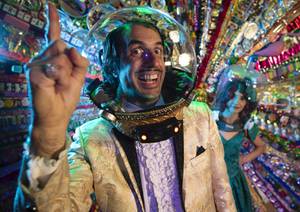 Gazillionaire and Penny Pibbets are back in action in Absinthe.

A few other shows, live music offerings and stand-up comedy rooms had previously relaunched, but Absinthe became the first major Strip show to resume performances in front of a live audience last night with 7 and 9:30 p.m. productions. That will be the schedule moving forward, Wednesday through Sunday, with all tickets priced at $149, available at spiegelworld.com.

The Spiegeltent traditionally holds 660 guests. State guidelines allow an audience of 250 but the venue’s revamped seating arrangement—with cabaret tables accommodating parties of two to five positioned no less than 6 feet apart—contributes to the current plan of 153 people per show.

When you arrive, you’ll check in at the outdoor courtyard at Caesars’ Strip-side Roman Plaza and join a fast-moving, socially distanced line. You’ll answer a few quick questions as part of a health screening and receive a no-touch temperature check. Then you’re in. You’ll be assigned to a color-coded group for entry and exit into the tent. Grab a drink and enjoy the weather; there aren’t many Strip showrooms with an outdoor lobby.

You can also order drinks at your table by scanning a QR code sticker and choosing your beverage on your phone. Once you’re seated, you’ll be reminded to keep your mask on unless you’re drinking and to wait to be dismissed by group when the show is over.

The first few moments of Absinthe’s first show back were understandably tight, with the smaller audience waiting to see what the show would feel like. The room’s new, temporary configuration has most of the action taking place on an expanded stage at one end of the room, but the circular stage at the center of the tent is still used for several acts, including the opening descent of the Green Fairy. She sings and dances while wearing a mask, and that quickly becomes one of the only things she’s wearing.

All of the artists wear masks, which must be a hindrance for the acrobatic performers but never takes away from the performance. Gazillionaire and his equally profane sidekick Penny Pibbets wear giant, clear helmets like vintage astronauts, although Penny appears to have fashioned hers from a plastic five-gallon water jug. Absinthe is embracing the circumstances of COVID-19 in its own unique way, making the best of a tough situation by mocking our collective situation and the fact that we’re all so tired of it.

But at the same time, producers Spiegelworld and partners Caesars Entertainment are clearly going above and beyond with preparation and planning to keep guests safe and make everyone feel comfortable. You won’t notice the tent’s new air purification system or the antimicrobial coating on the floor. You will notice how much fun you’re having and how the talented cast can create connections despite their increased distance and concealed faces.

The reopening performance featured many of Absinthe’s hallmark acts, from alluring girl-in-a-bubble Lucia Carbines to energetic juggling trio Water on Mars. Asher Treleavan, the Australian comedian who has been of the stars of Spiegelworld’s Opium at the Cosmopolitan, seemed to steal the reopening show with a commanding performance with the juggling apparatus known as the diabolo. If he didn’t, that honor goes to pole acrobat Hamish McCann, who had the audience screaming for more with his gravity-defying moves and awe-inspiring physique. “That’s what happens when you’re stuck at home doing situps for seven months,” Gaz explained.