The last time I saw “Mystére” was at least 12 years ago. Considering the small number of current Las Vegas Strip productions that have even been around for a dozen years, that simple statement has a superlative feel to it.

But my reaction to seeing it again last week is even more astonishing. “Mystére” celebrated its 25th anniversary at Treasure Island in December. It is the foundation for the entertainment empire Cirque du Soleil has built on the Strip. I’ve seen every other Cirque show that’s come to Las Vegas, most of them multiple times, in addition to every major production and headliner show that’s occurred in recent years, plus many touring concert events. I have all the big Vegas entertainment in my brain all the time. I was not expecting to be amazed and inspired all over again by something I assumed would feel familiar.

But that is the monumental magic of “Mystére.” Cirque set the standard for sensory overload when “Mystére” became its first permanent resident show in Las Vegas in 1993, a mixture of otherworldly staging, astounding acrobatics and circus arts, whimsical comedy and ethereal live music and dance. 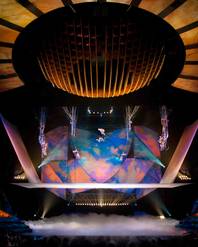 The cast of 65 has seen some change over the years but many of the original acts remain, though most have seen significant evolution. The latest changes are the addition of the duo straps act, a male and female aerial choreography duo that soars over the wide-eyed audience, and the updated planche act where speedy performers catapult each other on a new teeterboard and dash, flip and spin across the multi-trampoline power track.

Since it was the first, “Mystére” might exist in your memory — as it did in mine — as the “smaller” Cirque show. But that’s a trick. The 1,600-seat theater at Treasure Island feels very intimate and warm — especially when the great clown Brian Le Petit entertains during the beloved pre-show — but the massive scale of “Mystére” is revealed throughout the performance by the moving, expanding, wrap-around stage space.

In fact, there’s no space in this theater that isn’t part of the show, which is filled with some of the most dramatic moments in Las Vegas entertainment history. My favorite is the Chinese poles portion, which begins when several troupes of characters begin to climb on balance while the fantastically creepy Double Faces descend from the sky to join the fun. Eventually the mischievous Yellow Bird finds his precarious perch atop this temple of acrobatic artistry and you realize there is too much happening, you’ve missed something, and you’ll need to see the show again.

The entire audience gasps during the impossible hand-to-hand act, when brothers Marco and Paulo Lorador demonstrate infinite strength and balance and create human structures you will never understand. The jubilant, colorful Bungees, the first of two trapeze acts, mark another highlight, clearly exerting superhero-like powers as they bounce and fly in unison from the theater’s ceiling.

It’s ridiculous to call “Mystére” small in any way. It is certainly one of the most family-friendly and all-ages-appropriate among Cirque’s current shows, as well as the most affordable; tickets start at $49.50. Put that price against any other big Vegas entertainment offering and there’s really no contest. “Mystére” is every bit the must-see experience it was 25 years ago. Go back now and feel it for yourself.