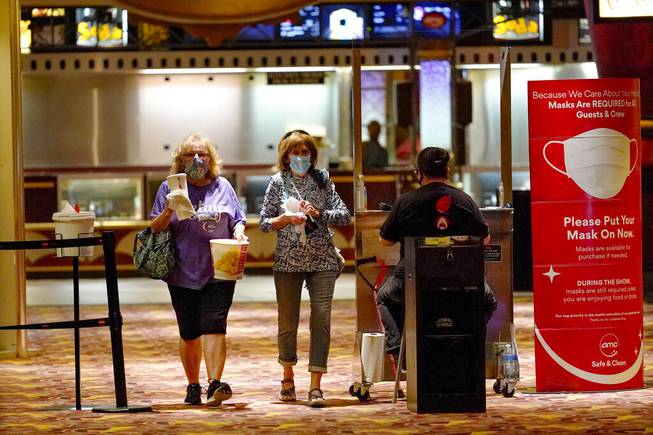 Betty Gallagher, left, carries popcorn and drinks beside Mary MacBeth as they pass by the ticket checkpoint, heading off to see, “I Still Believe”, one of the first showings at the AMC theatre when it re-opened for the first time since shutting down at the start of the COVID-19 pandemic, Thursday, Aug. 20, 2020, in West Homestead, Pa.

WEST HOMESTEAD, Pa — The doors to the AMC Waterfront 22 were locked. They had been for five months, along with most indoor theaters in the U.S. because of COVID-19. But in 20 minutes that was about to change and four people in masks were already gathered outside the theater 8 miles southeast of Pittsburgh in eager anticipation. They were there to see the Vin Diesel movie “Bloodshot” for 15 cents a ticket. After so many months, 20 extra minutes didn’t seem like all that long to wait.

The lights started slowing coming back on in theaters nationwide Thursday with AMC Theaters, the country’s largest chain, leading the charge.

AMC opened some 113 locations across the U.S., advertising retro pricing and retro screenings to entice audiences back to the movies. Regal, the second largest exhibitor, is following suit Friday. It’s been a long-time coming for the beleaguered businesses, which had several false starts due to coronavirus spikes.

When the doors at the West Homestead theater finally opened, masked employees stood in the lobby to greet patrons and help them navigate the new safety protocols inside, where masks are required (except when eating and drinking concessions) and the sick are asked to stay home. Pretty soon, the number of customers had doubled and in time there was a steady stream of people of all ages coming through the doors ready to experience the big screen again.

“My son and I counted the days until it reopened. We love coming to the movies. That’s why we’re here,” said Betty Gallagher. “And today’s 15 cents, so that was another incentive.”

The “1920s pricing” was a main draw for most of those early customers. One 58-year-old man, Jerome Heslin, said he hadn’t been to a theater in over 40 years, but the price got him back.

After opening day, the back-catalog films from “Black Panther” to “Grease” will cost $5 a ticket.

For others, it was something to do with their children. Leslie Lopez came out with her 5-year-old daughter to see the live-action “Beauty and the Beast,” as did Lindsey Adams with her 3-year-old, bedecked in Belle’s golden ball gown.

Neither were concerned about COVID-19.

“We have our masks on and our hand sanitizer and we’re taking our precautions,” Adams said. “We’re sure the theater has done everything they could.”

There was a bit of a learning curve for some patrons when it came to the new safety and social distancing protocols. Some wandered in with masks down by their chins (an employee quickly approached them to ask that they cover their faces). Others were surprised that concessions were cash only. And at least one family was extremely disappointed to find out that the movie they wanted to see was already sold out.

But others had already mastered the art of ordering concessions online, like Eileen Nucci and her husband, who simply told the employees their name and were handed their food and cups in a paper shopping bag.

They weren’t alone. Even without a new movie in the bunch, within 30 minutes, 17 of the 20 showtimes had sold out and all that remained were a few tickets for “The Goonies,” “Jumanji: The Next Level” and the Christian film “I Still Believe.” Tickets for “The Empire Strikes Back” and “Back to the Future” had already been gone for days.

A sellout, however, isn’t exactly what it used to be. AMC is only selling to 30% capacity, which in this location meant about 25 people per screen. Each film only gets two screenings a day to give employees ample time to clean. And showtimes are also being staggered to help prevent too many people from congregating in the lobby.

New movies are soon to follow, though, which the theaters are counting on for survival. Disney’s much-delayed “New Mutants” will debut on Aug. 28 and Christopher Nolan’s “Tenet” will follow soon after, with some screenings as early as Aug. 31.

At least one patron was a little reticent to come back.

“I wasn’t sure if I wanted to, but then I saw they were playing ‘The Empire Strikes Back,’ one of my all-time favorites, and I’m like, ‘I’ll see how bad it is with the mask. It’s only a couple of hours,’” said Jason Parks.

It’d been a few years since he’d seen the “Star Wars” film on the big screen. He even wore his Luke and Vader lightsaber fight t-shirt for the occasion.

But he’s not entirely sure yet if he’ll be rushing to the theater again soon.

“It all depends on how I feel after today,” Parks said. “If this is a little too much, maybe not, but as of right now it’s not too bad.”