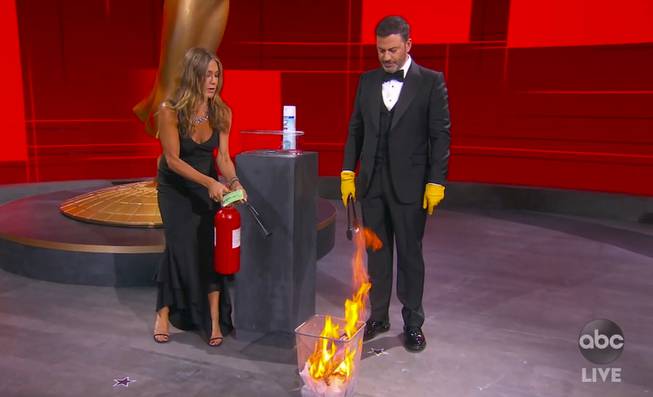 The Television Academy and ABC Entertainment via AP

In this video grab captured on Sept. 20, 2020, courtesy of the Academy of Television Arts & Sciences and ABC Entertainment, Jennifer Aniston, left, and Jimmy Kimmel sanitize the winner’s envelope while presenting the award for outstanding lead actress in a comedy series during the 72nd Emmy Awards broadcast. (The Television Academy and ABC Entertainment via AP

LOS ANGELES — Jennifer Aniston missed out on an Emmy but proved herself as an award-worthy first responder when a ceremony stunt got overheated.

In a bit during Sunday night’s Emmys, host Jimmy Kimmel sprayed an envelope holding a winner’s name with disinfectant then, for good measure, dropped it in a wire wastebasket and set it on fire.

So far, so good, ceremony executive producer Reginald Hudlin said Monday. A test had been run beforehand, with a booster added to make the fire more visible, and things were going as planned when the scene was shot — including Aniston to the rescue.

“Jennifer comes with a fire extinguisher. She puts the fire out. But the fire ain’t out,” he said with a laugh. She sprayed the wastebasket again, but as she and Kimmel bantered the fire flared again, bigger, and “we’re like ‘uh oh,'” Hudlin said.

But she “gets in there and and puts the fire out, for real,” he said, and the production team relished the unplanned moment. “We’re like, ‘That was great!’ We couldn’t script it better than that because it was truly out of control. We loved it.”

The skit in the downtown LA Staples Center concluded with Kimmel announcing Catherine O’Hara as top actress for the sitcom “Schitt’s Creek,” which made a historic sweep of all the comedy categories.

Faced with creating a virtual ceremony because of the pandemic, producers came up with innovative measures — including sending cameras to the homes of 100-some nominees and enlisting Aniston and other game stars for comic relief.

The former “Friends” actor was nominated for her role in “The Morning show” on Apple TV+, with the lead drama actress trophy going to Zendaya for HBO’s “Eurphoria.” Aniston won an Emmy in 2002 for the sitcom.