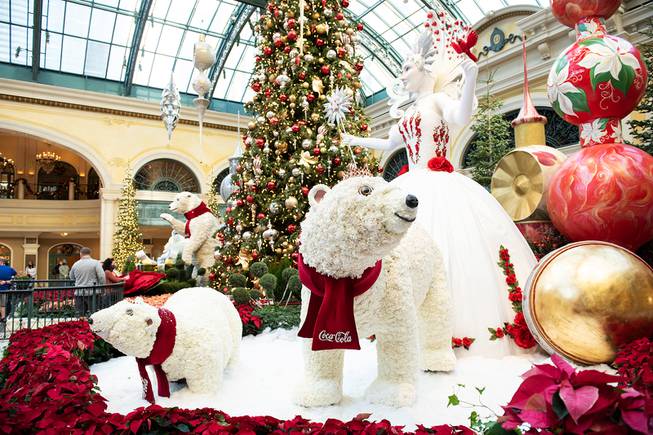 At this year’s winter wonderland display, a snow queen emerges from an enchanted forest to greet guests at the Bellagio. This scene from Monday, Dec. 7, 2020, also features affable polar bears and a centerpiece 42-foot fir tree.

Bellagio’s Christmas snow queen Bellissima gazes serenely at her visitors to usher in a season of cheer and optimism, perfumed by two dozen firs and tens of thousands of carnations.

Bellissima made her return to the Bellagio Conservatory’s annual holiday display this month, a main figure in one of the seasonal feats of four-dimensional artistry and horticultural engineering for which the Strip resort is known as much as its dancing fountains and the canopy of hand-blown flowers hanging over the lobby.

This year’s theme is “Hopeful Holidays” and the details are impeccable and infinite, from the gilded sesame seeds affixed to the queen’s chariot wheels and the 14,000 hand-strung Swarovski crystals on the topper of the centerpiece 42-foot live fir. There are also hand-painted swirls of the larger-than-life finial ornaments surrounding the 20-foot-tall Bellissima and the brocade finish of her snow-white hoop skirt that spreads 14 feet in diameter.

Typically, the conservatory can be accessed from multiple entry points, but pandemic-driven physical distancing protocols now funnel guests through a single entry with maroon velvet ropes on stanchions lining a path. On the plus side, this makes the experience feel more exclusive, Baeckeroot said. It slows down the flow, allows visitors to take in the details that the Bellagio team worked six months nurturing and snap photos with less-obstructed views. It also lets guests see the story in linear order.

And there is a story, and it goes like this, explains conservatory designer Ed Libby: Bellissima is emerging from an enchanted forest to journey to the Bellagio. Cardinals, her forest neighbors, twitter out of a Faberge egg and polar bears wave with giant paws of ruffled white carnations. Troubadours with glittery bugles flank her walk-through carriage, lined with plush, tufted velvet and pulled by horses in feathered headdresses. A cozy living room, with fireplace, playful puppy and whimsical elves, awaits. The warm color palette of reds, golds and silvers offers a different experience by day and night, Libby said.

The cardinals represent hope and health, and the egg, rebirth, said Baeckeroot. Meanwhile, the carpets of poinsettias carry a tradition from their native Mexico of children laying weeds at altars, where the weeds miraculously become flowers, Libby said.

For the designer, now in his fifth year at the Bellagio, it’s rewarding “to be able to design something and have a team execute it so flawlessly.”

The tiara-wearing mother and daughter bears leading Bellissima out of the forest get their flowers individually touched up daily; over the display’s monthlong run, these two bears alone will go through 70,000 fresh-cut carnations, Baeckeroot said.

“That area really smells like fresh-cut carnations over there — cinnamon, it’s wonderful,” she said.

The main grand tree and the 25 smaller lighted firs around the conservatory perimeter came from Mount Shasta in Northern California. The trees’ farm survived threats from California’s many recent wildfires before being shipped to Las Vegas, where the main tree alone is adorned with 7,000 white lights and 2,500 ornaments.

Mother and daughter Flo and Linda Day, both Las Vegas residents, marveled at every scene.

“I think the candy cane columns are incredible,” said Linda, 61.

The Christmas display will come down Jan. 9 and Lunar New Year scenes will go up immediately. There is always a display, and lucky passersby can see the work happen in real time during six-day windows between shows, when a crew is arranging the figures, trees and flowers 24 hours a day.