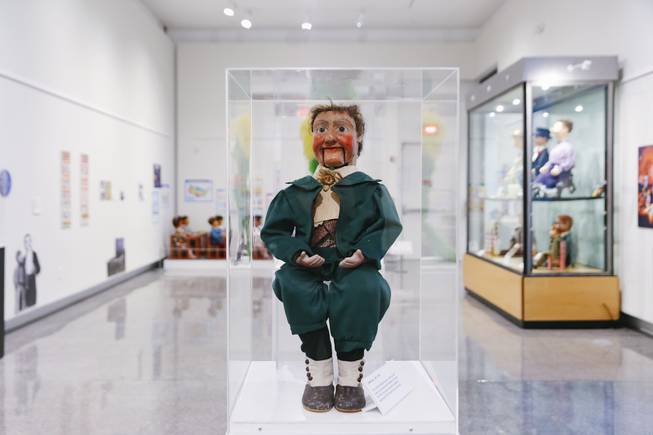 “Little Guy,” made around 1895-1900, is displayed at the exhibit “Valentine Vox: Ventriloquism: From Ancient Sages to Modern Stages. Three Thousand Years of Vocal Conjuration” at the Sahara West Library, Tuesday, Feb. 16, 2021.

A traveling exhibit showcasing the history of ventriloquism, from its early association with witchcraft to the present-day performing art, is on display at the Sahara West Library.

Ventriloquism is a form of entertainment that features a performer throwing their voice to create the illusion it’s coming from a puppet or dummy.

But, as the display documents, the origins of ventriloquism date to “the darkness of witchcraft” in ancient times, when diviners imitated the spirits of the dead.

The exhibit includes dummies dating from the 1800s through today, including iconic figures such as Edgar Bergen’s Charlie McCarthy, which made the cover of Time in the 1940s.

Also included is Paul Winchell’s puppet Jerry Mahoney. Winchell made frequent guest appearances on the “Ed Sullivan show” with Mahoney and was famous for his humorous skits and quiz segments.

The exhibit was put together by Valentine Vox, who performed a ventriloquist act on the Strip from 1995 to 2000. He also founded the International Ventriloquist Association, which holds its annual convention in Las Vegas.

The free exhibit runs through March 14 at the library at 9600 W. Sahara Ave.