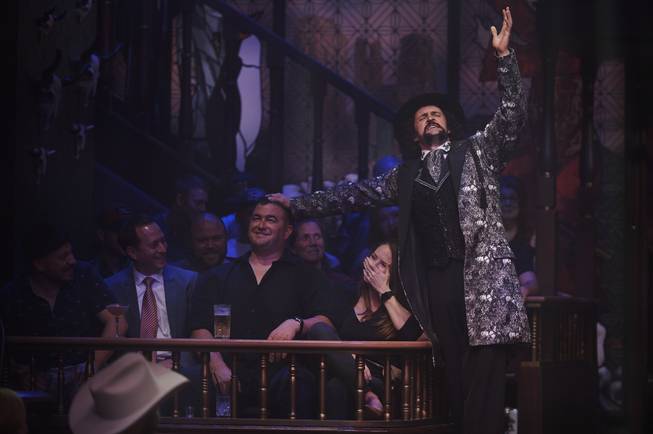 Audience interaction is an essential ingredient in “Atomic Saloon Show.”

With the opening of “Atomic Saloon show” at the Venetian, Las Vegas has entered the era of peak Spiegelworld.

The upstart live entertainment production company kicked its first dent in the Strip with “Absinthe,” a show best described by its promotional tagline “Funny, erotic and so very wrong.” It’s been delighting and offending audiences from its tent in front of Caesars Palace for more than eight years and remains one of the most popular shows in Las Vegas, but it was the success of sci-fi comedy “Opium,” arriving at the Cosmopolitan last year, that boosted the company’s confidence in regards to expansion. There’s a fourth show, the disco-infused “We Are Here,” likely coming to Las Vegas soon and there’s no reason to believe it wouldn’t be another hit. Spiegelworld productions are bold and irreverent, different enough to stand out, edgy enough to keep the buzz going, and most importantly, excessively fun.

“Atomic Saloon show” is nothing short of riotous. At the grand opening performance on September 18, cast members roamed through the crowd before the show, joking and drinking with jovial audience members while music blared and strangers and friends threw soft dinner rolls at each other. That sense of enjoyable chaos continues when good-natured yet profane singing cowboy Blue Jackson opens with a song and we’re introduced to our host, the madame Boozy Skunkton, and her assorted and ambitious cast of characters. As Spiegelworld boss Ross Mollison warned us on the All The Vegas podcast, “Atomic” moves at breakneck speed and packs in maximum laughs-per-minute. It sometimes feels like an unpredictable free-for-all, but it’s all by design.

The acts are not unfamiliar for fans of “Absinthe” and “Opium.” There’s comedy, dancing, quirky circus sideshow-style performances, aerialists and acrobats, but each artist’s talents fit cohesively into a loose storyline that makes this show irresistible. It’s not about plot; it’s all about characters. It’s the most cohesive of the Spiegelworld shows right out of the gate, and the volume of talent blended with an intimate, truly unique venue creates an experience that feels authentic and uncommon.

Boozy Skunkton and the Reverend Peabody get the laughs and the gasps, a pair of nuns push the boundaries with rare musical ability, and pole-dancing and aerial straps acts are modified with fresh interpretation. There’s a bit of a love story between two young, beautiful people that adds an unexpected portion of warmth to the show, and Italian acrobat Davide Zongoli adds awe-inspiring crescendos with two aerial acts that feel especially intense in this compact environment, big things on a small stage.

“Atomic Saloon show” adds plenty of surprises along the way and especially at the finale. Even more than its predecessors on the Strip, this show — currently scheduled through March 1 according to the Venetian’s website — makes you want to come back and see it again as soon as possible. Or maybe you just won’t want to leave.

“Atomic Saloon show” is performed at 8 p.m. Monday and Tuesday and at 7 and 9 p.m. Thursday through Sunday on the third floor of the Grand Canal Shoppes at the Venetian and more information can be found at spiegelworld.com.