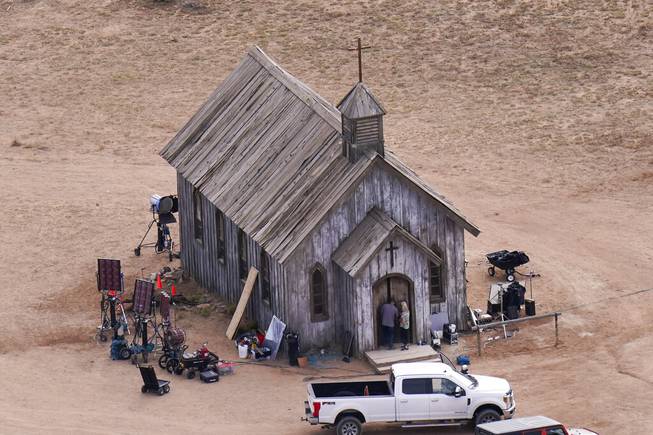 This aerial photo shows a film set at the Bonanza Creek Ranch in Santa Fe, N.M., Saturday, Oct. 23, 2021. Actor Alec Baldwin fired a prop gun on the set of a Western being filmed at the ranch on Thursday, Oct. 21, killing the cinematographer, officials said.

NEW YORK — The fatal shooting by Alec Baldwin on a movie set has put a microscope on an often-unseen corner of the film industry where critics say the pursuit of profit can lead to unsafe working conditions.

With a budget around $7 million, the Western “Rust” was no micro-budget indie. The previous best-picture winner at the Academy Awards, “Nomadland,” was made for less. But the New Mexico set where Baldwin shot cinematographer Halyna Hutchins had inexperienced crew members, apparent safety lapses and a serious labor dispute.

For some in the business, the failures reflect larger issues in a fast-evolving movie industry.

“Production is exploding, corners are being cut even more and budgets are being crunched down even more,” said Mynette Louie, a veteran independent film producer. “Something’s got to give.”

The shooting happened at a busy time: Production is ramping up following the easing of pandemic restrictions. Streaming services are increasing demand for content. And all the while, the industry is wrestling with standards for movie sets.

Santa Fe County Sheriff Adan Mendoza said there was “some complacency” in how weapons were handled on the set. Investigators found 500 rounds of ammunition — a mix of blanks, dummy rounds and suspected live rounds, even though the set’s firearms specialist, armorer Hannah Gutierrez Reed, said real ammo should never have been present.

Attention has focused on the 24-year-old Gutierrez Reed, who had worked on only one previous feature, and assistant director Dave Halls, who handed the gun to Baldwin. According to a search warrant affidavit, Halls called out “cold gun” to indicate it was safe to use but told detectives he did not check all of the weapon’s chambers.

“This was incompetence, inexperience and — I hate to say this — lack of caring about your job. If there’s a whole bunch of ammunition thrown together in a box, that’s not how it’s done,” said Mike Tristano, a longtime professional armorer.

Several “Rust” camera crew members walked off the set amid discord over working conditions, including safety procedures. A new crew was hired that morning, according to director Joel Souza, who spoke to detectives. He was standing near Hutchins and was wounded by the shot.

The New Mexico chapter of the International Alliance of Theatrical Stage Employees union called reports of nonunion workers being brought in “inexcusable.” The union will soon vote on a new standards agreement covering 60,000 film and TV crew members — a deal reached with major studios after IATSE prepared for the first strike in its 128-year existence.

In a statement, “Rust” executive producer Allen Cheney said the six producers on the film collectively had more than 35 years of experience in film and television. He called “Rust” a “union-certified production.”

James Gunn, the “Guardians of the Galaxy” filmmaker, suggested a slipshod culture could be partly to blame.

“Dozens have died or been grievously injured on movie sets because of irresponsibility, ignoring safety protocols, improper leadership and a set culture of mindless rushing,” Gunn said on Twitter.

The gaffer on “Rust,” Serge Svetnoy, faulted the movie’s producers for “negligence.”

“To save a dime sometimes, you hire people who are not fully qualified for the complicated and dangerous job,” Svetnoy said in a Facebook post.

Veteran prop master Neal W. Zoromski told The Los Angeles Times that he declined an offer to work on “Rust” because producers insisted that one person could serve as both assistant prop master and armorer.

Gary Tuers, property master of “Tomorrow War” and “Jurassic World: Fallen Kingdom,” said the shooting was “an indictment of the modern production culture, which for the last 30 years has pursued tax credits and found every way imaginable (and several that weren’t) to sacrifice crew health and safety in the name of budget consciousness.”

“This tragedy was an apparent accident,” he wrote on Instagram. “But it was also a predictable outcome of the incentive structure within the modern film industry.”

Several companies came together to finance and produce “Rust,” including Baldwin’s El Dorado Pictures. The film, which is based on a story by Souza and Baldwin, was financed in part by Las Vegas-based Streamline Global, which describes its business model as “acquiring films that offer certain tax benefits” that may “reduce the owner’s federal income tax liability from income earned from other sources.”

Even before the shooting, the most likely destination for “Rust” was probably video on demand. Last year, Baldwin promoted the movie to buyers at the virtual Cannes film market. The actor told The Hollywood Reporter that the script reminded him of “Unforgiven,” a 1992 Western starring Clint Eastwood.

Days after the shooting, the production of “Rust” was suspended indefinitely.

The movie was being made under a tax provision called Section 181, which applies to films costing $2.75 million to $7.5 million. It can allow investors to break even before a film reaches any screen, particularly in a state with generous tax credits like New Mexico. The state has been a popular place for productions in recent years. Some of its regulations, including for on-set weapons experts, are less stringent than in California.

In his 30-year career, the armorer Tristano hasn’t often experienced producers or crew members who cut corners on safety. But when safety is in question, he has not hesitated to pull his team off a set.

“Whenever I was on a set where there was a lot of panic going on, or the AD (assistant director) was rushing, I would say, ‘OK, I’m locking the guns back in the truck,’ ” Tristano said. “I’d say, ‘When you guys are ready to do it right, we’ll do it. If you don’t like that, fire me.’ ”