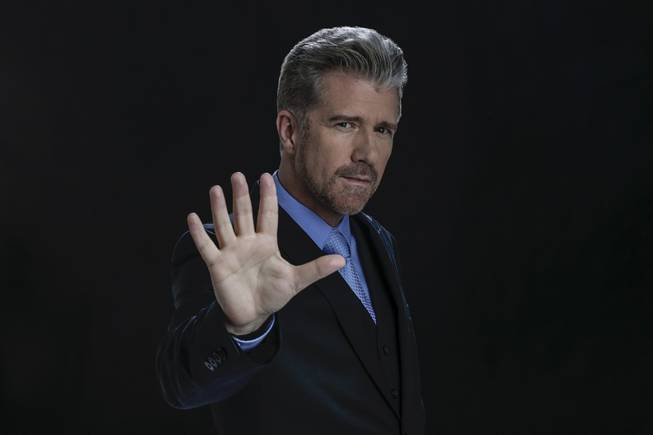 He has performed and appeared on dozens of TV shows and worked for years behind the scenes with the biggest names in magic, including Criss Angel, Penn & Teller and David Copperfield. Now the time is right for renowned mentalist, escapist and illusionist Banachek to emerge from behind the curtain and become a Las Vegas Strip headliner.

“Banachek’s Mind Games Live” makes its debut at the Strat this week, featuring an array of original feats and stunts created by Banachek and assembled in a highly interactive and thought-provoking production. The recently re-energized Strat Theater is a natural home for the new show considering Banachek has been working for years with the venue’s new operator, Adam Steck and his SPI Entertainment, to develop something for Vegas audiences.

“I’ve been working with [Steck] on a few opportunities but things happened beyond my control to stop them from happening,” Banachek says. “Two different times, I had a room and was ready, then something happened. And then COVID came along and caused some bad things but some good things as well, and it’s very nice to be in this 620-seat room and have a set location where I can get extremely creative.”

SPI Entertainment started running the room in early June and has since introduced a slate of new shows including magician Xavier Mortimer’s “The Dream Maker,” currently running at 6 p.m. nightly except Tuesday; the “Sammy Hagar and Friends” headlining musical residency set to open on October 29; and the dance-centric “iLuminate” arriving on August 26. Michael Jackson tribute show “MJ Live” is the remaining holdover from the pre-pandemic era in the theater and is expected to continue performances through the end of the year.

But Banachek’s show is planned to be something completely different from any of those productions or any other magic or mentalism show on the Strip. He’s known for crafting memorable illusions for others like the famous Penn & Teller bullet catch, and for death-defying escape acts he’s performed in the past, but his real specialty is playing those “mind games” with his audience and turning observers’ expectations against them.

“I don’t really like to be called a magician even though I am, but I perform magic with information and the human mind, basically mapping out the best and worst of the brain and all the mysterious, unchartered territories in between,” he says. “People say I’m a profiler, but it’s more than that, it’s skill in observation of the natural world and an understanding of the psychology of magic. And I insist time and time again that psychic powers are not real. It’s about taking all five senses to create the illusion of a sixth sense.”

Expect to witness a range of stunts from a group ESP experience where audience members are sending thoughts to each other, to Banachek’s signature version of Russian roulette done with knives.

Banachek was born in England and has lived in South Africa, Australia, and across the United States, but he’s spent a significant number of years living and working in Las Vegas. His familiarity with magic shows here and the entertainment landscape in general was instrumental in the development and timing of the launch of his show.

“Part of why I thought this is the time is that it seems it became, for a while, all about those big extravaganza shows, and [Vegas] sort of lost that personal feeling in entertainment,” he says. “Especially now after COVID, we really have the opportunity to connect with audiences. And live theater, like going to the movie theater again, has really become an event.”

“Banachek’s Mind Games Live” opens Wednesday, August 4 and will perform at 4 p.m. daily except Tuesday at the Strat Theater. Tickets start at $29 and more information can be found at tickets.thestrat.com.