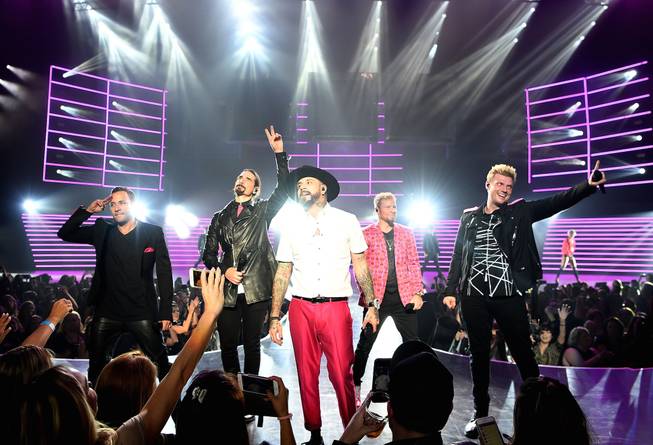 The Backstreet Boys’ residency concludes this weekend at Planet Hollywood.

Las Vegas is crowded with music from every decade going back to the 1950s this weekend, so no matter what your favorite sound and most familiar era might be, there’s something for us all, waiting to be re-discovered and appreciated all over again.

FRANKIE AVALON Paramount Studios is working on a prequel film to “Grease.” Maybe it will have a computer-generated version of Avalon’s Teen Angel character. It should. Either way, you can see the ageless crooner do his thing all weekend long at the South Point Showroom. April 26-28, info at southpointcasino.com.

BACKSTREET BOYS This is it. No more BSB at Zappos Theater at Planet Hollywood. There are just two shows left on Friday and Saturday to close out the boy band’s successful run in its first Las Vegas residency, a concert series so beloved by nostalgic fans that it wouldn’t be surprising to see the group return to the Strip after completing its upcoming DNA World Tour. April 26-27, info at caesars.com.

ALANIS MORISSETTE The “You Oughta Know” and “Ironic” singer isn’t a resident performer but maybe she should be. After two tremendous shows in June, she’s back for another weekend set at the Pearl at the Palms. April 26-27, info at palms.com.

STEELY DAN Donald Fagen has returned to the Venetian Theatre for another round of Steely Dan’s “Reelin’ in the Chips” engagement, this time without fellow band founder Walter Becker, who died in 2017. But the Dan goes on with a diverse set from a legendary catalog of jazz-rock, continuing through May 11. April 26-27, info at venetian.com.

LEGENDARY LADIES OF MOTOWN Martha Reeves of Martha Reeves and the Vandellas and Mary Wilson of the Supremes co-star in this celebration of one of the most memorable eras in American music history at the Orleans Showroom Saturday night. April 27, info at orleanscasino.com.