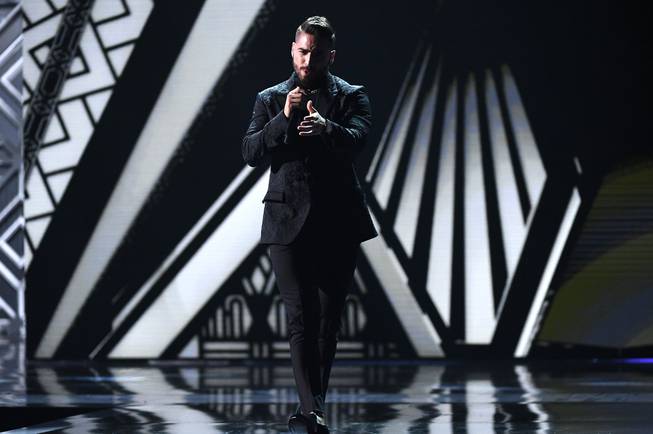 Maluma is back on the Strip this weekend.

A new family-friendly attraction opened on the Las Vegas Strip this week. FlyOver, a high-tech experience taking guests on a multi-sensory journey of simulated flight over 22 different iconic destinations across the U.S., is ready and waiting next to the Hard Rock Café on Las Vegas Boulevard. It feels real without taking you out of your seat, but if you need some live entertainment to spark your holiday weekend, there are bountiful options on and off the Strip.

LITA FORD This British-born rocker is a legitimate legend after her formative years with the Runaways and a successful solo career dabbling in metal and other rock genres. Catch her live at the Golden Nugget Showroom Friday night. September 3, goldennugget.com.

DONNY OSMOND The second new headlining residency launched in 2021 by Caesars Entertainment (after Usher’s show at the Colosseum) landed at Harrah’s Showroom this week. Donny Osmond is more than a familiar face in Las Vegas after a wildly successful run with his singing sibling Marie Osmond at the Flamingo — not to mention decades of other performances around town — but this new production is his first solo residency and he’s ready to interact with fans and revisit the greatest hits of a spectacular and unique career in showbiz. September 3-4, caesars.com.

BILLY STRINGS The Theater at Virgin Hotels Las Vegas returns to concert duty next weekend but it’s far from the only venue on the revamped property where you can find live music. The Event Lawn is an innovative and versatile new spot surrounded by vibrant restaurant patios and pools and it’ll host two performances from 28-year-old bluegrass phenom Billy String to celebrate Labor Day weekend at Virgin. September 3-4, virginhotelslv.com.

MALUMA The Colombian singer and songwriter is finally getting out and touring behind his fifth studio album “Papi Juancho,” released more than a year ago. With the annual El Grito celebration and its many Latin music events returning to Las Vegas later this month, Maluma’s weekend concert at Michelob Ultra Arena at Mandalay Bay should set the right tone. September 4, mandalaybay.com.

JOHN MULANEY Long graduated from his writing gig on “Saturday Night Live,” John Mulaney has become one of the most popular and prolific stand-up comedians in the country, as he’s expected to display with two upcoming performances at Park Theater. September 4-5, parkmgm.com.

ONEREPUBLIC One of the biggest and most exciting entertainment venues on the Las Vegas Strip finally comes back to life this weekend when pop-rock outfit OneRepublic hits the stage at Zappos Theater at Planet Hollywood for back-to-back concerts. Coming soon to this room: Pitbull, Judas Priest, Gwen Stefani, Backstreet Boys, Shania Twain and KISS. September 4-5, caesars.com.