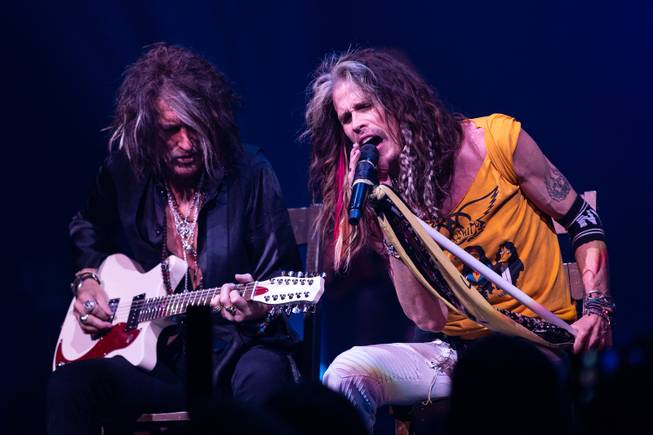 Aerosmith performs at Park Theater for the launch of their residency Saturday, April 10, 2019.

A big new show opens this week in a classic Vegas room on the Strip and if that’s not enough to get you excited about a weekend full of musical entertainment, you could check out the return of a certain Boston band that just played the Grammy Awards and co-starred in a new commercial all about Las Vegas.

RUPAUL’S DRAG RACE LIVE An all-star cast of queens from the wildly popular TV show lends some serious style to this new production show at the Flamingo Showroom, co-produced and directed by RuPaul and the Emmy-winning team behind the small-screen version. They’re bringing it to life at center Strip. January 31-February 1, info at caesars.com.

GEORGE STRAIT The “Strait to Vegas” residency at T-Mobile Arena continues Friday and Saturday night (with opening act Gone West) and the king of country will be back on the Strip in August. January 31-February 1, info at t-mobilearena.com.

THEO VON Comedian and podcaster Theo Von is on the verge of a major breakthrough as he’s been cast in the upcoming sci-fi thriller “Ghost Draft” with Chris Pratt. But stand-up is his bread-and-butter for now and his “Dark Arts” Tour lands at the Mirage’s Terry Fator Theatre this weekend. January 31-February 1, info at mirage.com.

VAN MORRISON The legendary Irish singer-songwriter has made a January appearance at the Colosseum a regular thing in recent years. This time around, he’s playing five shows through February 8 at Caesars Palace. January 31-February 1, info at caesars.com.