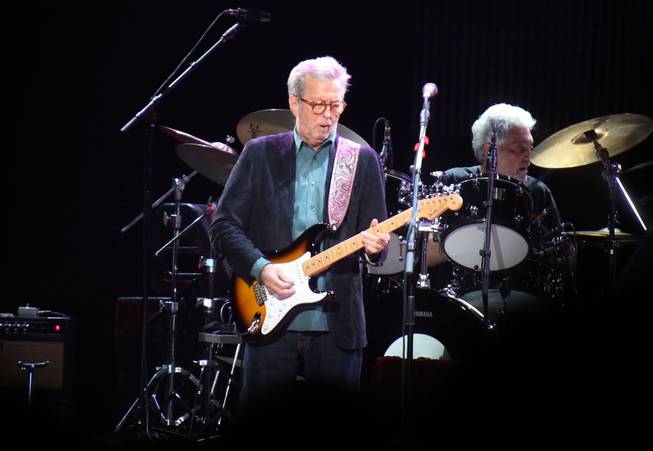 Eric Clapton is back in Las Vegas this weekend at T-Mobile Arena.

It’s a big weekend for sports in Las Vegas as the city’s second NASCAR race of the year revs up at the Las Vegas Motor Speedway and the heavyweight title fight between Tyson Fury and Otto Wallin takes over T-Mobile Arena Saturday night. And let’s not forget the first Vegas Golden Knights preseason game at the Fortress on Sunday and the first Las Vegas Aces playoff game on the same day. But there’s plenty of music and other fun to be found in the next few days on and off the Strip, so check out these entertainment options.

IRON MAIDEN The English heavy metal legends continue on their extended Legacy of the Beast tour with a Friday concert at MGM Grand Garden Arena before more southwest U.S. dates and then a jaunt to Mexico and South America next month. Expect elaborate, theatrical stage sets, plenty of material from the 1980s and a wild opening act from the Rave Age. September 13, info at mgmgrand.com.

ERIC CLAPTON For a different brand of equally memorable Friday night rock, head over to T-Mobile Arena to catch Eric Clapton with special guest Jimmie Vaughan. Clapton is performing few dates before the fifth annual Crossroads Guitar Festival this month in Dallas, and Vegas made the cut. September 13, info at t-mobilearena.com.

BITE OF LAS Vegas Mix 94.1 FM Radio’s annual Bite of Las Vegas music and food festival is set for Saturday at the Downtown Las Vegas Events Center, where doors open at 11 a.m. and Rob Thomas and Shinedown headline a full roster of rock-oriented artists and local restaurants serving up the goods. September 14, info at dlvec.com.

MALUMA The superstar singer from Colombia just launched his 11:11 tour and recently collaborated with Madonna on her new album. Maluma’s Saturday night show is one of many Latin music concerts at Mandalay Bay over Mexican Independence Day weekend, and one of the biggest. September 14, info at mandalaybay.com.

LAS Vegas ACES VS. CHICAGO SKY The first WNBA playoff game in Las Vegas is set for Sunday at 2 p.m. at the Thomas & Mack Center, with the Aces hosting Chicago for the second round matchup. If the Aces win, they’ll be back at Mandalay Bay Events Center Tuesday to start a best-of-five semifinal series against their next opponent. September 15, info at aces.wnba.com.