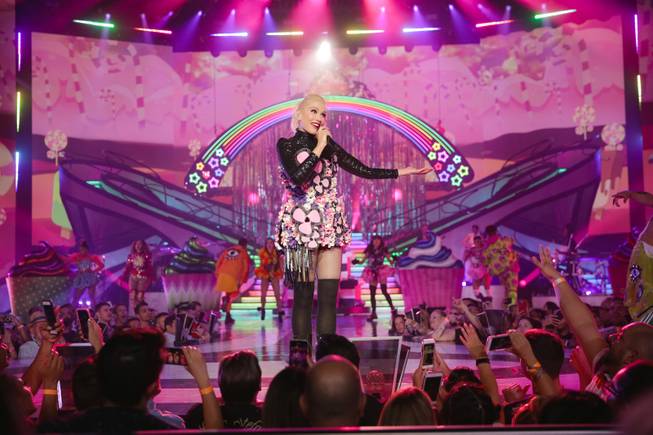 Gwen Stefani performs during her “Just A Girl” Residency at the Zappos Theater at Planet Hollywood.

It’s all fights and fireworks this Fourth of July weekend in Las Vegas as UFC 239 takes over T-Mobile Arena Saturday night. But there are other ways to celebrate with music, comedy, today’s pop superstars and even a little Elvis.

JOE ROGAN It wouldn’t be a UFC weekend in Las Vegas if comedian, podcaster and mixed martial arts color commentator was stirring up some trouble on the stand-up stage. Rogan performs Friday as part of the Aces of Comedy series at the Mirage’s Terry Fator Theatre. July 5, info at mirage.mgmresorts.com.

PENTATONIX Between concerts on the beach and Las Vegas Aces games at the House, Mandalay Bay is staying hot all summer long. More family friendly entertainment lands at the Mandalay Bay Events Center Saturday night when the vocal wizardry of Pentatonix hits the stage. July 6, info at mgmresorts.com.

ULTIMATE ELVIS TRIBUTE Justin Shandor’s resemblance to the King and captivating sound has made him an international sensation. He takes the stage at the M Resort Pavilion Saturday night at 8 p.m. July 6, info at themresort.com.