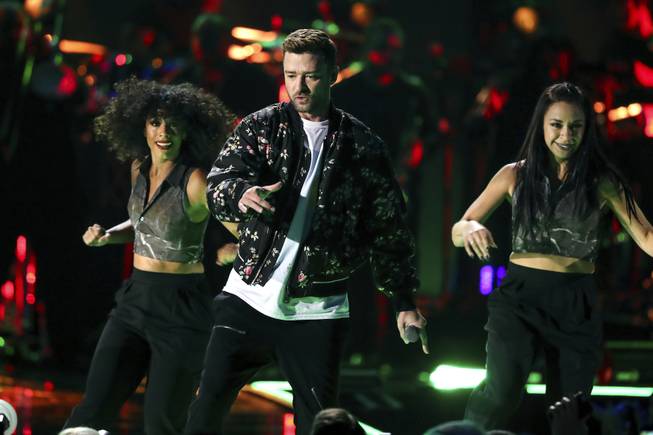 Resident performers Celine Dion and Gwen Stefani are back in town and so is first-time Vegas headliner Robbie Williams, but this weekend also brings a creative new show to the Excalibur and an encore performance from a touring pop superstar. Check out these entertainment options and take your pick.

JUSTIN TIMBERLAKE The Man of the Woods Tour is rolling into T-Mobile Arena once again, making up a postponed date from November when Timberlake was recovering from bruised vocal chords. Now he’s ready to rock Vegas one more time on his way to wrapping up the tour next month on the East Coast. March 8, info at t-mobilearena.com.

FUERZA BRUTA That state-of-the-art tent located between Las Vegas Boulevard and the Excalibur is the home of the newest immersive theater production on the Strip, the international sensation “Fuerza Bruta.” Music, dance, aerial artists and acrobatics whirl all around the audience, creating a unique and unconventional show experience. It opened a planned six-month engagement this week and plays at 7 and 9:30 p.m. Wednesday through Sunday. March 8-9, info at excalibur.com.

BARRY MANILOW Barry’s back Friday and Saturday and will return to the Westgate International Theater later this month, too. If you haven’t seen the ultimate pop singer-songwriter in his ideal Vegas venue, you’re just not doing it right. March 8-9, info at westgateresorts.com.