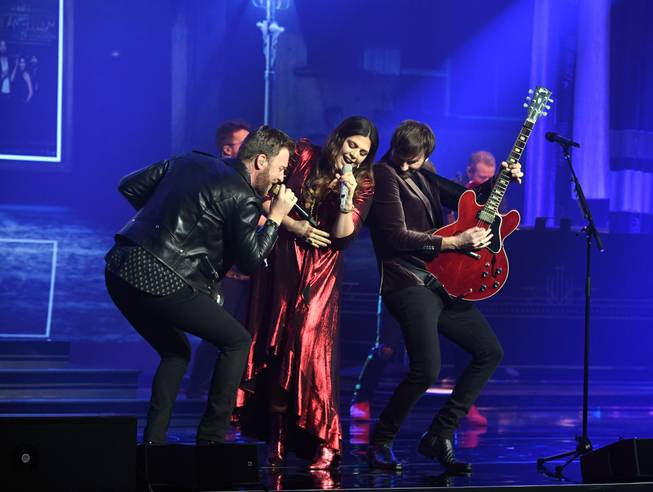 Lady Antebellum opened its residency at the Pearl on February 8.

It’s another weekend full of superstars on the Strip, including your last chances to catch Steely Dan at the Venetian and James Taylor at Caesars Palace. Check out these other monumental musical events and consider checking in on an old-school Las Vegas institution downtown, too.

HELLDORADO DAYS This annual event is now known as Las Vegas Days Rodeo and includes two days of bull riding, barrel racing, steer wrestling and other rodeo events at the Plaza’s new Core Arena, plus the traditional parade downtown on Saturday morning. May 10-11, info at plazahotelcasino.com.

LADY ANTEBELLUM Speaking of country-western Vegas traditions, a new one is being developed at the Palms. Hit-making trio Lady Antebellum returns to its residency at the Pearl theater this weekend and wraps up a springtime run on May 15, 17 and 18. May 10-11, info at palms.com.

PITBULL The headliners at Planet Hollywood’s Zappos Theater continue to come and go, but one of the most constant performers in this electric venue is Pitbull. Mr. Worldwide is back with his “Time of Our Lives” show and ready to bring the party to the Strip all month long. May 10-11, info at caesars.com.

CARRIE UNDERWOOD She’s back on top of the country music world with multiple nominations for June’s CMT Awards and serious momentum from her Cry Pretty Tour, which stops at MGM Grand Garden Arena Saturday night. Underwood gets opening support from Maddie & Tae and Runaway June for her Vegas show. May 11, info at mgmgrand.com.

ARIANA GRANDE The pint-sized pop star’s Sweetener World Tour rolls through the southwest after Saturday’s concert at T-Mobile Arena, then takes her to Europe in August, so catch her on the Strip while you can. May 11, info at t-mobilearena.com.