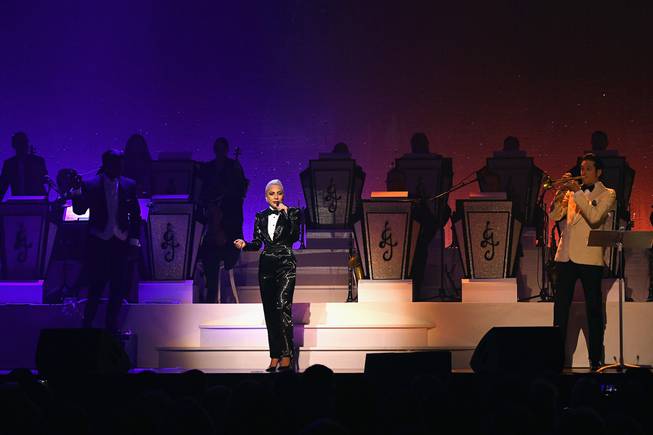 Lady Gaga is back at Park MGM for her “Jazz & Piano” residency show this weekend.

One of the community’s favorite family events is back for the first time in a long time this weekend when the Age of Chivalry Renaissance Festival returns to Sunset Park through Sunday. After you grab your turkey leg and catch a little jousting, check out these comedy, music and sports options designed to entertain everybody.

TOM DREESEN The legendary stand-up comedian and actor opened for Frank Sinatra for nearly 15 years and he’s sharing all his favorite stories from the road and plenty of laughs at the Italian American Club Friday night. October 15, iacvegas.com.

BARRY MANILOW Barry’s back at the Westgate International Theater this weekend but you might want to double down and snag some December show tickets while you’re in the building. Manilow recently announced his December 2-4 residency concerts will be holiday-themed, “A Very Barry Christmas.” The Fanilows won’t want to miss a minute. October 15-16, westgateresorts.com.

GRAND FUNK RAILROAD The Michigan-born party band is celebrating its 52nd year performing together during its new Some Kind of Wonderful tour, which makes a stop at the Golden Nugget Showroom Friday night. October 15, goldennugget.com.

HENDERSON SILVER KNIGHTS VGK took down the brand-new Seattle Kraken in our first hockey home opener this week, now it’s the Hendo Horseys’ turn. The Silver Knights start the new AHL season Friday night against the Colorado Eagles at the Orleans Arena and play it over again Sunday at 4 p.m. October 15 and 17, hendersonsilverknights.com.

LADY GAGA The triumphant return of Lady Gaga’s “Jazz & Piano” Las Vegas residency is guaranteed to sound better than ever thanks to new, customized immersive audio technology installed inside the 5,200-seat Park Theater, which has been rechristened as Dolby Live at Park MGM. Gaga’s Vegas home is now the first fully integrated performance venue of its kind to offer live concerts in Dolby Atmos, and she has plenty more concerts planned there through Halloween. October 16-17, parkmgm.com.

GILBERT GOTTFRIED The one and only Gilbert Gottfried is going extra blue this weekend at the Plaza downtown when his comedy cohorts Bobby Slayton, Thea Vidale and Patty Rosborough join him for a weekend of rowdy fun at one of the city’s most classic showrooms. This is a veteran lineup entertaining adults only, so be prepared. October 15-16, plazahotelcasino.com.

THE LON BRONSON BAND The smash theatrical hit “Cats” is in Reynolds Hall all weekend long, the first Broadway Series production to return to the Smith Center since early last year. But over at Myron’s, the Lon Bronson Band will be showing why its “industrial strength R&B, rock, soul and funk” sounds have been such a big part of the Vegas music scene for so long. October 16, thesmithcenter.com.