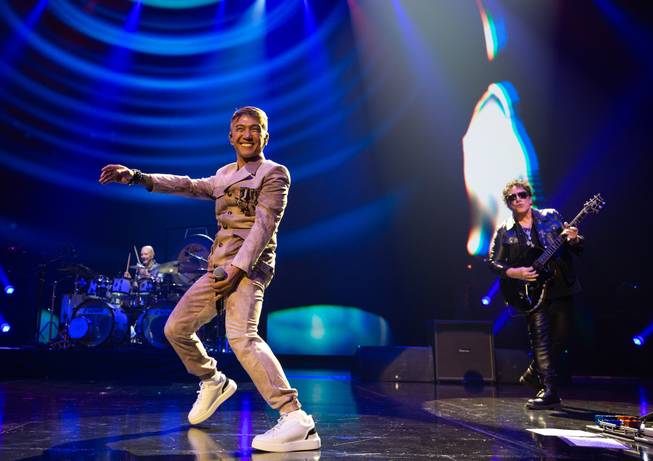 Arnel Pineda (left) and Neal Schon of Journey perform at the Colosseum on October 9.

The superstars are back on the Strip to celebrate New Year’s Eve but you can catch the biggest acts around on this final weekend of 2019 before that huge party arrives.

SHEILA E. Versatile drummer and singer Sheila E. brings much more than her ’80s pop hits to this Friday night show at the Dallas Events Center at Texas Station. Her most recent album “Iconic” offers a message in the music and dabbles in R&B, Latin jazz and funk. December 27, info at stationcasinoslive.com.

CHRISTINA AGUILERA The powerfully memorable voice behind ballads like “Beautiful” and upbeat hits like “Ain’t No Other Man” and “Fighter” returns to her residency concert at Planet Hollywood’s Zappos Theater this weekend. Then Aguilera closes our her huge year with two more performances for New Year’s Eve. December 27-28, info at caesars.com.

JOURNEY Two new Colosseum residencies from Keith Urban and Sting will start in 2020, but the hit-filled rock spectacle from Journey, which opened in October, is the show that will close out 2019 in the renovated Caesars Palace venue. December 27-28, info at caesars.com.

BABYFACE One of the most successful and prolific producers in the history of pop music performs his own smooth R&B smashes and celebrates the sounds of his era in the industry with three weekend concerts at the Terry Fator Theatre at the Mirage. December 27-29, info at mirage.com.