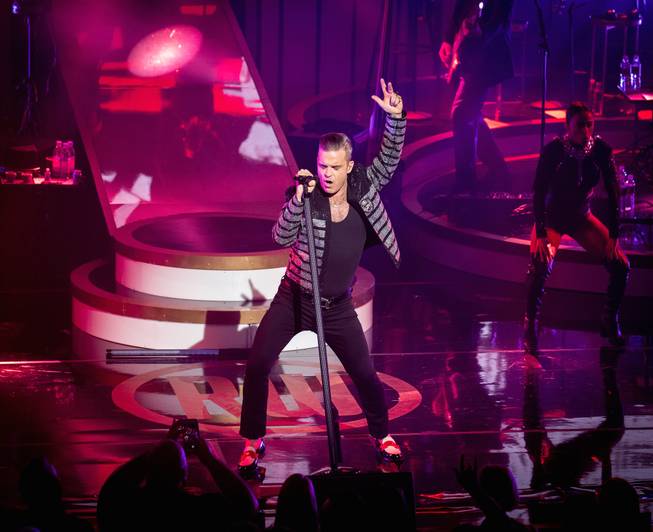 Robbie Williams does it all at Encore Theater.

Big laughs, big sounds and big stars are all on the docket this weekend whether you’re spending time downtown or on the Las Vegas Strip. Check out Caesars Palace Saturday for a first-time food festival featuring diverse Latin flavors.

ROBBIE WILLIAMS When British pop superstar Robbie Williams opened his “Live in Las Vegas” residency show at Encore Theater in March, he wasn’t sure which songs to sing because he was uncertain whether his audience would be dedicated fans or curious Vegas visitors looking for some musical fun. Now that the charismatic and impish entertainer is aware his fellow Brits are flying in to see his show and his American fans are hanging on every note, expect some significant setlist changes plus plenty of the vintage Vegas glam he was already adding to the mix. June 28-29, info at wynnlasvegas.com.

PAUL MCCARTNEY The 77-year-old icon hasn’t played a proper concert in Las Vegas in eight years (not counting a private show at Wynn in 2012 and an appearance at the iHeartRadio music festival in 2013). McCartney remedies that situation when his Freshen Up tour hits the Strip for two shows this weekend at T-Mobile Arena. June 28-29, info at t-mobilearena.com.

SUGAR RAY If you missed frontman Mark McGrath when he performed as part of “Salt-N-Pepa’s I Love the ’90s” show at Paris Las Vegas, or if you don’t want to wait until his July 20 appearance at the Flamingo’s Go Pool party, head downtown to the Fremont Street Experience Saturday for a free concert by his band Sugar Ray and all their hits, from “Fly” to “Someday.” June 29, info at vegasexperience.com.

TREVOR NOAH Between his political jabs on “The Daily show” and his last two Netflix stand-up specials “Afraid of the Dark” and “Son of Patricia,” Noah has emerged as one of the most prominent, relevant and versatile comedians across the landscape. He moves on up to the big stage at the Colosseum at Caesars Palace Sunday night. June 30, info at caesars.com.