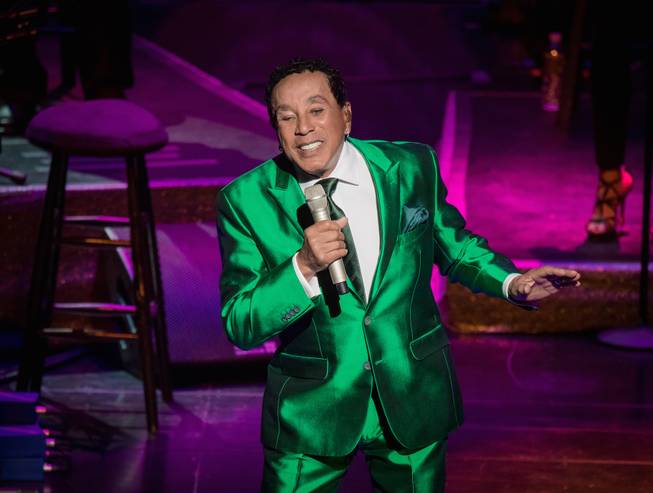 Smokey Robinson made his Wynn debut February 27 at Encore Theater.

This weekend is all about Vegas sports: There are two Golden Knights games sandwiching Saturday’s UFC 235 at T-Mobile Arena, the NASCAR Pennzoil 400 will be roaring at the Speedway, the USA Sevens rugby tournament is set up at Sam Boyd Stadium and the new Tuff Hedeman Bull Riding Tour at the South Point. Whether or not you’re engaging with any of these mega-events, maybe we should get some music into the mix? Check out these options for some varying vibes and sounds.

SMOKEY ROBINSON The man behind so much of the Motown sound made his Encore Theater debut Wednesday in front of a sold-out crowd and found time between classics like “Cruisin’” and “The Tracks of My Tears” to share stories about working with the Temptations, Stevie Wonder and others. Smokey wraps up this limited engagement with two more shows at Wynn. March 1-2, info at wynnlasvegas.com.

SARAH BRIGHTMAN The world’s best-selling soprano brings the music of her latest album “Hymn” to the Smith Center’s Reynolds Hall for a one-night-only concert spectacular. Whether you know Brightman’s voice as the original Christine in “The Phantom of the Opera” or her classic duet with Andrea Bocelli “Time to Say Goodbye,” this is a singular singer you won’t want to miss. March 3, info at thesmithcenter.com.

MATT GOSS Hot on the heels of the smash documentary “After the Screaming Stops,” which profiled the longtime Vegas headliner’s early days as a young U.K. pop star in the group Bros, there’s buzz that Goss and his real-life bro Luke, an actor, could sign a huge new record deal. Better catch Matt live in Vegas while you can in his new 8 p.m. Sunday slot at 1 Oak Nightclub at the Mirage. March 3, info at mirage.com.