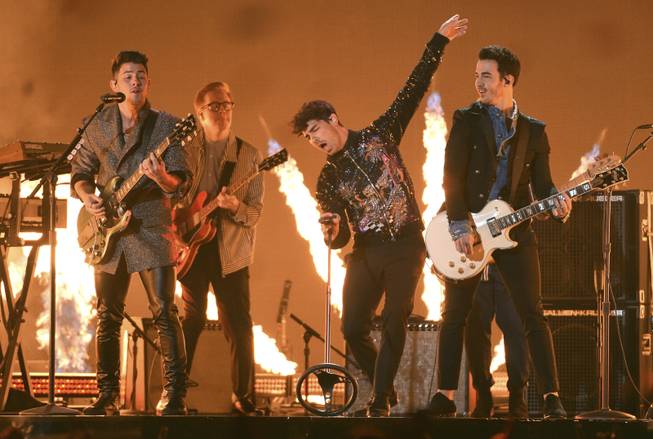 The Jonas Brothers perform at the Billboard Music Awards on May 1, 2019 at MGM Grand Garden Arena.

Musical superstars of several different decades are taking the stage along the Las Vegas Strip this weekend, providing plenty of opportunities to flash back to the tracks that made your favorite era so special. But mega-concerts aren’t the only option in the coming days; check out this big, bold lineup.

MICHAEL JACKSON ONE The electrifying homage to the King of Pop from Cirque du Soleil is back at Mandalay Bay this week and the cast, crew and creative team has been working for more than two months to make sure this musical spectacular is the same experience fans have come to expect. August 20-22, cirquedusoleil.com.

THE AFTER PARTY Get ready for a pop hit parade like you’ve never encountered as Boyz II Men’s Wanya Morris, NSYNC’s Joey Fatone and Backstreet Boys’ AJ McLean and Nick Carter team up for fun-filled weekend set at the Sand Showroom at Venetian. You’ll dance along to those groups’ many hits, covers of other favorites and probably catch a guest star or two along the way. August 20-22, venetian.com.

JONAS BROTHERS The reunited, chart-busting sibling act didn’t get to play its special series of shows at Park Theater in 2020, but the boys are making up for it with two concerts there this weekend to kick off their new “Remember This” tour. August 20-21, parkmgm.com.

SUMMERSLAM Only once before has World Wrestling Entertainment held one of its “big four” events in Las Vegas and that was almost 30 years ago. With Allegiant Stadium making waves as the hottest new sports and entertainment venue in the country, it only makes sense that Summerslam is getting in on the fun Saturday night. August 21, allegiantstadium.com.

NIGHT RANGER The sounds of the 1980s will take over Saturday night as classic rock outfit Night Ranger brings “Sister Christian,” “Don’t Tell Me You Love Me” and many other memorable tracks to the Westgate International Theater in one of the first events back in this iconic Vegas venue. August 21, westgateresorts.com.