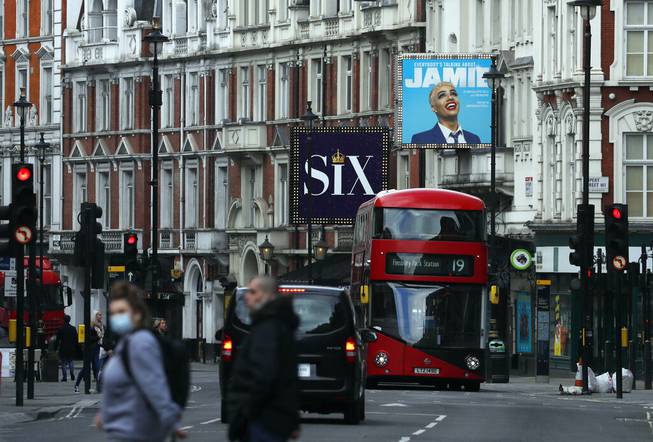 A general view of the exterior of the Apollo Theater, on Shaftesbury Avenue, which is making preparations to continue its run of the musical “Everybody’s Talking About Jamie’, in London, Monday, April 12, 2021.

LONDON — Noah Thomas saw his name in lights, and then the lights went out.

The young actor was still in drama school when he was cast to play the lead role in the London West End musical “Everybody’s Talking About Jamie.” Thomas made his professional debut in early 2020. Weeks later, as the coronavirus pandemic washed over Britain, the city’s theaters closed.

“It was a bit of a rude awakening,” Thomas said. “As the months ticked on — month one, month two, month three — you think, ‘This is a lot bigger than any of us could have anticipated.’”

More than a year on, the West End is preparing, with hope and apprehension, to welcome audiences back.

Plagues, fires, war — London has survived them all. But it has never had a year like this. The coronavirus has killed more than 15,000 Londoners and shaken the foundations of one of the world’s great cities. As a fast-moving mass vaccination campaign holds the promise of reopening, The Associated Press looks at the pandemic’s impact on London’s people and institutions and asks what the future might hold.

The stages that collectively employ 300,000 people were ordered shut a week before the country went into full lockdown in March 2020. They have remained closed for most of the last 13 months, endangering thousands more related jobs in bars, restaurants and hotels that cater to theater-goers.

“We were the first to be closed,” producer Nica Burns said. “And we were the last to come back.”

One of those sidelined when theaters went dark was Neil Maxfield, who turned his love of musicals into a job leading walking tours of London’s West End, the district that is home to more than three dozen theaters and long-running juggernaut shows including “Les Miserables,” “The Lion King,” “Hamilton” and “Harry Potter and the Cursed Child.”

“I just love the West End,” said the energetic Maxfield, sporting the top hat that he wears on tours. “I love how vibrant it is, I love how versatile it is — that mixture of not just musical theater but plays as well, and new things coming in all the time.”

But for most of the past year, the West End has been spookily deserted, the streets resounding to road crews and construction work rather than nighttime crowds.

Some wonder if its energy will ever return. When lockdown froze much of the economy, the British government stepped in to support jobs. Many theater workers fell through the cracks; as freelancers, they weren’t eligible for the payments given to furloughed employees. Many took jobs as delivery drivers or retail workers; some were forced to leave London because of sky-high rents.

“When you get told that you don’t apply for such and such government funding or benefit schemes, you sort of think, ’Oh wow, OK. So I really didn’t get into this for the money,’” said Thomas, whose face still adorns the Apollo Theatre marquee as Jamie, a working-class teenager who dreams of being a drag queen.

“We’re coming back to do our jobs. We’re not going to give up what we do, what we’ve trained to do,” he said.

“Everybody’s Talking About Jamie” is set to reopen on May 20, one of the first West End shows to return once the government allows indoor venues to admit limited audiences on May 17.

Burns, who owns the Apollo and five other London theaters, has invested in hand sanitizer stations, one-way arrows and an electronic ticketing system. She has had seats removed so mask-wearing, temperature-checked audience members can keep a distance from one another. Cast and crew members will be tested every 48 hours and kept apart from audiences and front-of-house staff.

The producer says reopening is a “leap into the dark,” but she’s encouraged by what she observed during a brief period in December when theaters opened up — only to close days later for another national lockdown.

“I watched audiences leave the theaters much, much happier than when they arrived,” Burns said.

About a third of West End theaters plan to reopen in the coming weeks, but it will be a long way from normality. Big, expensive shows can’t afford to run at the half-capacity limit demanded by social distancing requirements. The government is aiming to remove attendance limits on June 21, but may keep them in place if the virus starts to surge again.

Although two-thirds of British adults have had at least one dose of a coronavirus vaccine, the government is nervous about new virus variants that may resist existing shots.

Even if British audiences return, U.K. theaters will have to do without international tourists for the foreseeable future. Theater and music businesses have also lobbied, so far unsuccessfully, for a government-backed insurance program in case live events have to be canceled because of COVID-19.

Julian Bird, chief executive of the Society of London Theatre, an umbrella group, said the industry is crying out for certainty that the government will follow the reopening road map it created earlier this year.

“People are risking money, they’re spending actual money,” Bird said. “And that is all at risk if the government changes its mind now.”

Those working in the industry are confident theaters and other cultural institutions will survive. Artists are resilient, and the government, after strong criticism, has handed out more than 1.2 billion pounds ($1.7 billion) in grants and loans to arts and culture organizations.

But many worry about the damage already done. Nickie Miles-Wildin, associate director of Graeae Theatre Company, which is run by deaf and disabled artists, fears a setback for hard-won diversity in the theater.

For its millions of fans, London’s West End has a special magic, an energy rivaled only by its New York competitor, Broadway. London-born actor Hiba Elchikhe, 28, who plays the title character’s best friend in “Everybody’s Talking About Jamie,” is confident that will endure.

“And I don’t believe that this (pandemic) is going to hinder it in any way. I think people are really craving to be back in theaters.”