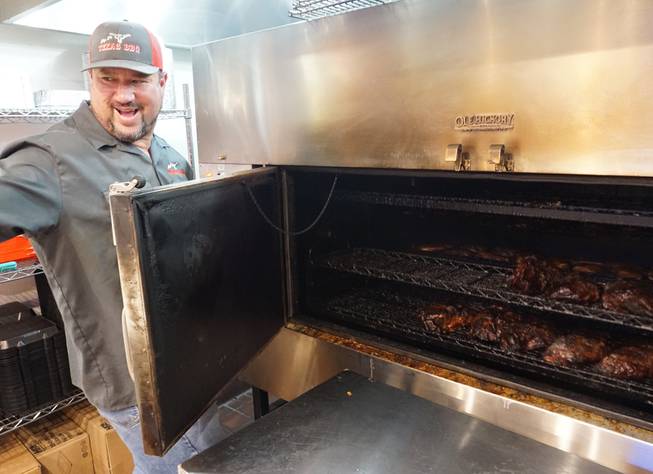 Big B’s Brian Buechner shows off the smoker at his new restaurant location.

Great barbecue is obviously all about the meat. But if you ask me, a great barbecue restaurant is about the size of the tables. I need big wooden picnic tables at my favorite joint, with plenty of space to bring an army of hungry friends and family and sprawl out a complete selection of smoked meats and tasty side dishes.

That’s a big reason why I like to visit Big B’s Texas BBQ, which opened almost four years ago on St. Rose Parkway in Henderson. It’s a big, bright space with giant tables, and it’s fun to cruise down the cafeteria-style line ordering your food. And get this: the second location of Big B’s has an even bigger square table that seats 20.

Brian Buechner, a Texas native who opened Big B’s with his wife Natalia Badzjo, built all the tables in the new restaurant, located in the southwest valley in the space formerly occupied by Andre’s Bistro. Buechner drives back home to Texas on a regular basis to haul the wood for the smokers, an authentic touch that distinguishes the flavors at Big B’s.

“We’re such a mixing pot of people here from different cultures,” he said of Las Vegas and its varying tastes for barbecue. “We bring our wood in from Texas and it’s a very different flavor profile. Not everybody’s gonna love it. But if you like this style and go try another style, it’s not going to match at all.”

Beef is the meat of choice in the Lone Star State and the same is true at Big B’s. Brisket is the top seller, followed closely by tri-tip and then pulled pork. But the family-style menu also includes chicken, turkey, baby back pork ribs and beef ribs and hot links, along with popular sides like corn on the cob, mac and cheese, barbecue beans and garlic green beans.

“The great thing about barbecue is that it’s not a trend, it’s a tradition,” Badzjo said. “Trends come and go. People think something is cool for a few months and then it kind of phases out, but barbecue has been around for a hundred years and it’s not going anywhere. And with more [local] places opening up, the demand in town is growing for barbecue.”

The couple started looking for a second location a couple years ago when they noticed a number of regular customers were driving from the west side of town. The fast-growing southwest area had a unique appeal, and the new Big B’s is “close enough” to the Summerlin and Mountain’s Edge communities, Badzjo said.

“We’ve had nights already where we’ve beaten the other store [in sales],” Buechner said. The second restaurant also offers a full bar in addition to two large dining rooms and a patio space.