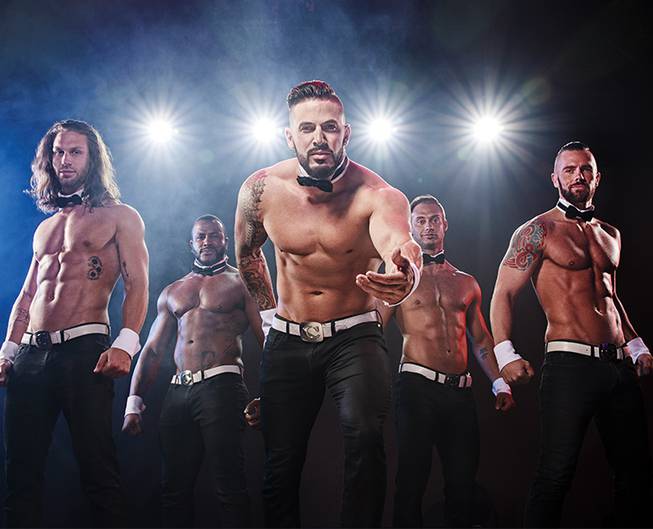 “Chippendales” is looking for a new home in Las Vegas.

Some of the longest-running and most well-known shows on the Las Vegas Strip are suddenly homeless.

While many productions are gearing up to return to live performances as soon as possible as Las Vegas is set to return to pre-pandemic conditions on June 1, Caesars Entertainment confirmed this week that several live entertainment venues at its casino properties including Caesars Palace, Paris, Planet Hollywood, Bally’s and the Rio will not reopen.

Among the shows that are now searching for new venues are Wayne Newton’s headlining residency, the iconic 19-year-old male revue “Chippendales” and the equally legendary, 33-year-old female revue “Crazy Girls.”

The producers, casts and crews of these shows and others were reportedly notified of the closures late last week without advance notice. Most production teams were planning their reopening strategies.

“It’s unfortunate that after five amazing years at Planet Hollywood, they closed our theater and others with no notice. The right thing would have been telling us earlier because we would already be open by now somewhere else,” said Norbert Aleman, producer of “Crazy Girls.” “Their decision not only affects me but also our entire cast and crew. Now we are actively looking for a new venue and have had many reach out to us already. We’ve been on the Strip for 33 years and plan to be around for many more.”

“Crazy Girls” had been playing at the Sin City Theater at the Planet Hollywood resort, sharing the space with classic rock tribute show “Tenors of Rock.” At the Rio, the second-level theater where “Chippendales” had been playing since 2004 will not reopen; a spokesperson for that show confirmed it is seeking a new Vegas venue.

At Caesars Palace, the classic Cleopatra’s Barge will not reopen as a live entertainment venue. Newton is working with Caesars to find another location at a Strip property for his long-running musical production. At Paris Las Vegas, the small showroom that was home to “The Anthony Cools Experience,” “Friends! The Musical Parody” and “Sex Tips for Straight Women from a Gay Man” will remain shuttered permanently.

And next door at Bally’s at the renovated space where another female revue, “X Rocks,” was making plans to reopen, plans have changed. Stabile Productions, which currently plays sister shows “X Burlesque” at Flamingo and “X Country” at Harrah’s, is expected to find another venue for “X Rocks.”

A statement from Caesars explains the closures as a “strategic decision to refocus the entertainment programming across our Las Vegas properties. Unfortunately, this means that some of our smaller capacity venues will close, and some shows will not return.

“Decisions like these are never easy. Some of these shows have a long history with us and in Las Vegas. While their run with our company is now ending, we are grateful for their incredible performances, their many talented cast and crew members, and everything they brought to our resorts and guests.”

The company also confirmed that three shows that had been playing at center Strip property Harrah’s from musicians the Bronx Wanderers, comedian John Caparulo and magician Mac King, will not return to their respective venues. King, a headliner for more than two decades, confirmed his show has found a new theater and will announce his reopening plans on May 25.