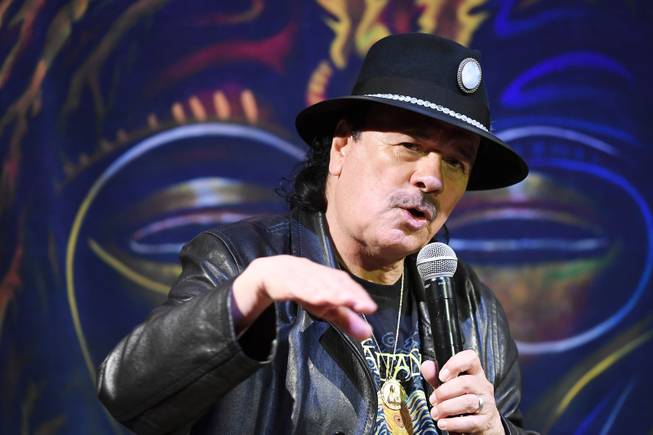 Carlos Santana speaks during a press conference at the House of Blues in Mandalay Bay on May 14, 2019.

August 25 will bring the return of one of the longest running musical residency headlining shows on the Las Vegas Strip to the House of Blues at Mandalay Bay. Rock legend Carlos Santana will be kicking off his ninth year of shows at the stalwart music hall this summer and he says it’s a “golden opportunity” to be a part of the return of live entertainment to Las Vegas.

“I have never looked at [music] as a job or work or even as a profession. For my wife and I, it’s always just been a way of life. My father did it and his father did it and now my son does it,” Santana says on this week’s episode of the Sun on the Strip. “And we see now it’s like water and air, we are an ingredient that people gotta have, because it gives them hope and courage, which is something the world needs right now.”

Santana’s special series of Vegas performances started at the Hard Rock Hotel in 2009 and eventually shifted to the House of Blues, but his very first time playing Vegas was as the opening act for the Grateful Dead.

“At that time, hippies like us were not really allowed on the Strip, so we grew up almost like adversaries with Las Vegas until this situation presented itself,” he says. “The thing I was afraid of in Las Vegas or on Broadway is that you would become like a hamster going around and around, but I had to dissolve that fear.”

The exposure to music fans from around the world is what helped him get over that impression, and he says he’s “infinitely more grateful and appreciative to be in Las Vegas now.”

Santana has plans to release to a new album, “Blessings and Miracles,” around the same time as his return to the Strip and some of that fresh material could work its way into the shows. The record features contributions from blues and soul star Steve Winwood, Metallica guitarist Kirk Hammett, singers Rob Thomas and Ally Brooke and composer Diane Warren among others.

After he’s back onstage, the Woodstock icon and guitar legend will be gearing up for a 2022 touring run with Earth, Wind & Fire. But right now, he’s looking forward to playing to live audiences again and sharing the latest creative output.

“For being 73 years old, this stuff is kicking some serious booty with energy,” Santana says. “It’s better than ever because I’ve been exercising, eating good and resting. We’re ready to come out and share with the people some really juicy notes.”