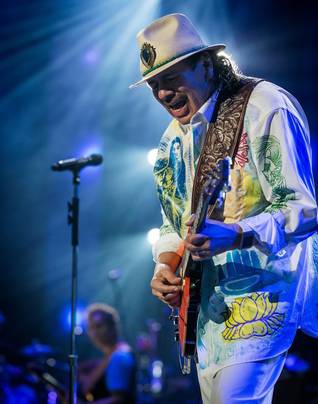 Carlos Santana returns to his residency at the House of Blues this week.

The historic Woodstock music festival of August 1969 introduced Carlos Santana to the world 49 years ago. To celebrate this anniversary, Santana’s long-running musical residency at the House of Blues at Mandalay Bay is offering $49 tickets to Las Vegas locals for the show’s remaining 2018 dates.

“For me, Woodstock is everywhere all the time,” says the 71-year-old Rock and Roll Hall of Famer. “The thing that’s consistent is utilizing music as a template for imprinting innocence and a thirst for adventure.”

I spoke with Santana this week to catch up on where he’s been (touring Europe) and where he’ll be (back at the House of Blues for new shows in 2019), and I even managed to find out which Vegas show he’s planning to see.

It’s pretty amazing that Woodstock was 49 years ago and here you are, still doing what you do.

When I think back to that time now, the thing that is consistent to me is how music keeps bringing unity and harmony to the world and breaking down walls, and hopefully other people still have this in mind. There’s a reason I love the Doors. They always sound to me like I’m [a kid] practicing in a garage and their music could take you to the four corners of the world. I utilize that and Bob Marley and John Lennon and John Coltrane and Marvin Gaye, all the ones I cherish, to keep working and transforming fear. People tell me I sound like a hippie. Well guess what? I am a hippie.

You played all over Europe all summer long. Did you visit any new places or venues?

We did a couple new ones and also hit some spots we haven’t done in a while. What’s amazing to me at 71 years old is these places are packed or sold out and we see grandparents, parents and teenagers. A lot of young people come curious, like, what’s the big deal with this? Then they hear it and it’s [different] because we don’t lip sync or play [recorded tracks]. You feel this avalanche of really powerful energy. With all due respect and honor to every musician who’s ever played in this band, this band has the most energy consistently. The thing we have in common is everyone is dead center with passion and emotion and is feeling a sense of purpose, good pride and clarity. There’s no doubt in this band, no uncertainty. And we play with humility because we remind ourselves how wonderful it is to still have people after all these years come and pay. I have what I have because of people.

How different is the touring show from the Las Vegas show?

The live shows outside the House of Blues, especially in Europe, we get to take more liberties with improvising. We have pockets and islands in the middle of the set where we just go, people just follow me and we improvise on the spot. We might create a new song right there or revisit a song from Marvin Gaye or Miles Davis. At the House of Blues we only have so much time, a 90-minute set or two hours at the most. But we know the people want to hear yesterday, today and tomorrow and no matter where we are, we bring freshness and newness and fun. We know people want to hear “Black Magic Woman” and “Smooth,” but how do you make it new? It’s a good question. It’s important to crystallize your soul and spirit to dance with the holy ghost so by the time your brain is telling your anatomy what to do, you’re imbued with newness and freshness. When you live in your mind too much, you become pathetically predictable and miserable with self-doubt. It’s not a good place to be. Step outside your brain, practice doing that and your breath will change, your energy will change, your motive will change and your enthusiasm will change.

Your live shows have evolved over the years but what about your House of Blues show? Next year will be your seventh year with this Vegas residency.

You know, I said something to Joe Cocker before he died — we played together at Woodstock and at many places and I went to see him at the Oakland Coliseum when he opened for Tom Petty. I said, “You know you and I, we used to be charcoal but now we’re diamonds.” He stopped what he was doing and looked at me and was like, “Oh, I like that.”

You’ve lived in Las Vegas for several years now. What do you like to do with your time off? Do you make the rounds and go see shows and do that kind of stuff?

Cindy [Blackman Santana, his wife and the band’s drummer] and I like to take beautiful drives up to Red Rock and also go to the dam. We don’t go out too much. But I would like to start to go to new places and shows. I’ve seen “Michael Jackson ONE” two or three times and I never get tired of it. I want to see “The Beatles LOVE” next, that’s my goal.

“An Intimate Evening with Santana: Greatest Hits Live” returns to the House of Blues at Mandalay Bay at 7 p.m. September 12, 14, 15, 16, 19, 21, 22 and 23, with more show dates scheduled in October and November. More information can be found at houseofblues.com.