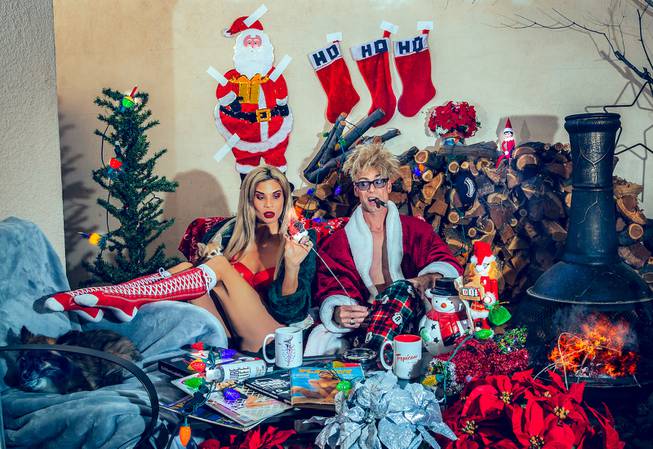 It’s been a tough year but Dani and Murray have a lot to celebrate this holiday season.

When the female revue “Fantasy” reopened at Luxor in early November, its comic guest star Murray Sawchuck had the opportunity to expand his act since the show was temporarily moving into a larger venue.

Producer Anita Mann invited the magician and funnyman to pull out his biggest tricks to help fill up the stage at the Luxor Theater, and that endeavor brought Sawchuck’s fiancée and fellow veteran Vegas performer into the mix. A former dancer and showgirl in the iconic “Jubilee!” production, Dani Elizabeth has been performing in “Crazy Girls” for five years and serving as host of the legendary burlesque romp for more than two years.

“Dani’s done the tricks. She learned them over the [COVID shutdown] when we did some YouTube stuff. So I said maybe [she] can help teach the girls,” Sawchuck says on this week’s episode of the Sun on the Strip podcast. “It’s not as easy as just getting in a box. Every move you make in that box is putting you somewhere so you don’t get stabbed or poked or ruin the trick.”

As Elizabeth worked with the “Fantasy” cast and crew to get the magic act ready, Mann quickly decided to invite Elizabeth to join the show and perform with Sawchuck.

“I said that sounds great, count me in,” Elizabeth says. “I had a moment where I was making lists of things I can do when Murray goes back to work, thinking, what am I going to do every night? I’ve got to keep busy.”

“Fantasy” is currently on hold, awaiting a possible update on restrictions for entertainment events that might allow the show to be performed once again on December 17. Meanwhile, Sawchuck has reopened his own show at the Tropicana’s Laugh Factory.

“It was kind of like summer camp, because you go back and you wonder if that same excitement is going to be there,” he says. “We opened the day after Thanksgiving and sold the maximum amount of tickets we can sell that weekend, which is pretty cool. And I’m the only magic show on the Strip at the moment.”

Sawchuck and Elizabeth never thought they’d be performing together but it’s a natural fit. Since Elizabeth made the transition from dancing in “Crazy Girls” to the role of the host, she’s been working on her comedy skills and Sawchuck is helpful with that development.

“A month into preparing my first monologue, it was like, oh my God, what am I doing? I’m a dancer, I don’t talk! But the producer said, ‘You’re from upstate New York and Italian and I see how you talk to your friends, so I think you’ll be all right,’” she says. “We went to a couple stand-up comedy open mic nights in L.A. and right before the world shut down, I went to my first one in Las Vegas. I was going to do it once a week and then the world shut down.”