Las Vegas is facing a tough challenge at the moment. A few weeks ago, our governor, Steve Sisolak, announced a statewide “pause” until Dec. 15 that required, among other things, to reduce the number of people who can gather from 250 to 50 or 25 percent of fire code capacity—whichever is less. This posed great challenges for many of the Strip production shows that decided to return a few weeks ago; many of those shows decided to close until Dec. 15. But some soldiered on. One of those shows was Extravaganza—The Vegas Spectacular, a show that originally opened earlier this year, only to close a day later as the entire state was shut down. As a result, most visitors to Las Vegas have not yet had a chance to see this show. But if they’ve seen its sister show, WOW—The Vegas Spectacular at Rio (which has yet to reopen), odds are they’ve already ordered their tickets.

Like WOW, Extravaganza is a variety show on a grand scale, full of performers and entertainers from all over the globe, staged in Bally’s legendary Jubilee Theater (which is more than expansive enough to accommodate social distancing). Be prepared for an entertainment sensory overload as dancers, acrobats, aerialists, skaters, comedians and, yes, showgirls take to the stage, full of spectacular sets and massive LED screens. As a special bonus, Extravaganza will feature holograms of some of the Strip’s most famous headliners. (Think the Chairman of the Board and the King of Rock and Roll and you’re on the right track.) 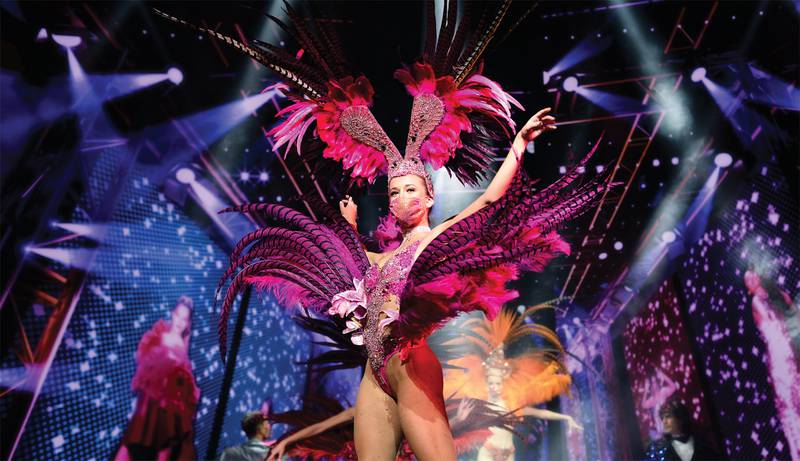 Acts include Pavel Bahaslou and Anastasiia Bogoslova, whose roller skating routine will have you holding your breath while increasing your adrenaline levels considerably (do not attempt their act at home!). There’s also a “Globe of Death” routine featuring a gigantic metal sphere and three talented motorcyclists who prove why timing is everything in entertainment. And get ready for an over-the-top, gigantic salsa number featuring some of the sexiest dancers you’ve ever seen.

As a special treat (and one that will be familiar to fans of WOW, where both performers appear), America’s Got Talent star Silvia Silvia will make a guest appearance to demonstrate her otherworldly skills with a crossbow. She’ll be joined by her husband, Victor Ponce, who has a special talent for plate spinning (another act we recommend you definitely not perform at home unless your plates are plastic!).

“We are excited to reopen Extravaganza in Las Vegas, which is my homage to this amazing city—bringing not only tremendous and unique performers from all over the world, but also some of the most iconic and thrilling acts and the return of the classic showgirls, who made the Jubilee Theater home for so many decades,” said creator and director Hanoch Rosènn in a statement.

And, in accordance with state mandates, all performers in Extravaganza will wear masks for the safety of patrons. This is family-friendly entertainment at its best, and a great way to celebrate the holidays.

Click here for your free subscription to the weekly digital edition of Las Vegas Magazine, your guide to everything to do, hear, see and experience in Southern Nevada. As part of your subscription, each week via email you will receive the latest edition of Las Vegas Magazine, full of informative content such as restaurants to visit, cocktails to sip and attractions to enjoy.