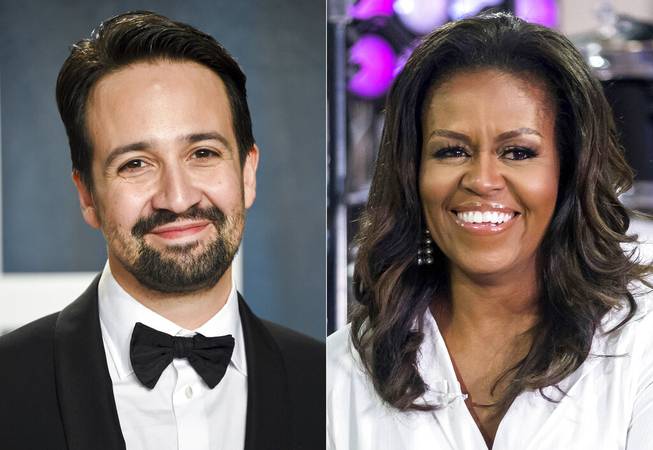 Lin-Manuel Miranda arrives at the Vanity Fair Oscar Party in Beverly Hills, Calif. on Feb. 9, 2020, left, and Michelle Obama participates in the International Day of the Girl on NBC’s “Today” show in New York on Oct. 11, 2018. Miranda and Obama will join other celebrities in “Roll Up Your Sleeves,” a vaccine initiative airing at 7 p.m. EDT Sunday on NBC.

“Roll Up Your Sleeves,” airing at 7 p.m. EDT Sunday on NBC, will feature Matthew McConaughey interviewing Dr. Anthony Fauci to help separate “fact from fiction” about the vaccines, the network said.

Biden will make a direct appeal in support of the effort, while Obama will be joined by basketball greats Charles Barkley and Shaquille O’Neal to reinforce the role of vaccines in allowing Americans to get their lives back on track.

Former first lady Michelle Obama will team with Miranda, Faith Hill and Jennifer Lopez in support of shots during the hour-long special hosted by spouses Russell Wilson, the NFL quarterback, and actor-singer Ciara.