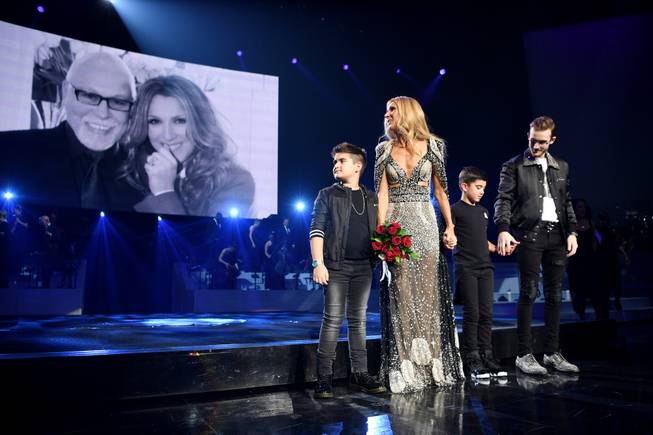 Celine Dion brought her children onstage at the Colosseum at Caesars Palace to conclude her final show on June 8.

“Wow, great crowd.” Those were the first words Celine Dion spoke during the grand finale of her record-breaking residency at the Colosseum at Caesars Palace Saturday night, a quick acknowledgment between performances of hit songs “The Power of Love” and “That’s The Way It Is.”

And that is the way it is. Over the course of her two residency shows at the iconic Las Vegas Strip venue — “A New Day” from 2003 to 2007 and “Celine” from 2011 until June 8 — the acclaimed vocalist performed 1,141 shows for more than 4.5 million fans. That’s a lot of great crowds at the 4,300-seat Colosseum, and of course the last show was an emotional, sold-out affair. 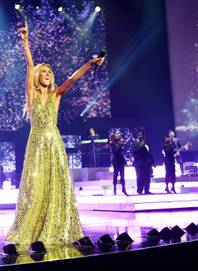 Celine Dion performs during her final show at the Colosseum at Caesars Palace on June 8.

“I’m supposed to know what to say, like, ‘how’s everybody doing tonight,’ but I think you did answer that many times already,” she joked a few minutes later. “I am very excited and at the same time quite emotional. But you know, we have something in common because you’re feeling pretty awesome tonight, and all of us here onstage are feeling pretty awesome as well. So on behalf of my extended family, I want you to know we are all very excited to be here with you tonight. This is home away from home.”

She went on to explain how there are so many tremendous entertainment options in Las Vegas and then thanked her fans for choosing this show, as if Celine Dion didn’t revolutionize the Strip and pave the way for the modern headlining residency with her success. Then she made a crack about originally planning to perform for just a few months. “Here we are 16 years later, 16 incredible years,” she said, eliciting a roar from the crowd. “Maybe we have saved the best for last. Are you ready to have a good time tonight?”

Dion didn’t stray far from the formula for her final performance, rolling through her many hits and garnering standing ovations after favorites “It’s All Coming Back to Me Now” and “All by Myself.” She also debuted a new song, a modern dance track called “Flying On My Own,” and after singing her traditional set of covers from Prince and Tina Turner, wrapped it all up with “My Heart Will Go On.”

The show began with an opening set from Westgate Las Vegas headlining comedian George Wallace and a quick and funny video showing Dion packing up pieces of Las Vegas and hitting the road. The superstar will embark on her 50-city Courage World Tour this fall, starting September 18 in Quebec City, and its accompanying new album is set for release in November.

In the end, Dion gave special acknowledgment to the cast and crew that worked onstage and behind the scenes night after night to make the residency such a runaway hit, then wrote the final chapter with a heartfelt performance of “Somewhere Over the Rainbow” while photos from her career and images of her late husband and manager René Angélil appeared on the screen behind her.

“Honestly I don’t know how to express my real feelings at this moment, but if I may, I would like to sing this last song for you, which has been very sentimental for me and I think for all of us,” she said. “And I would love to offer it to all of you, with all my love.”