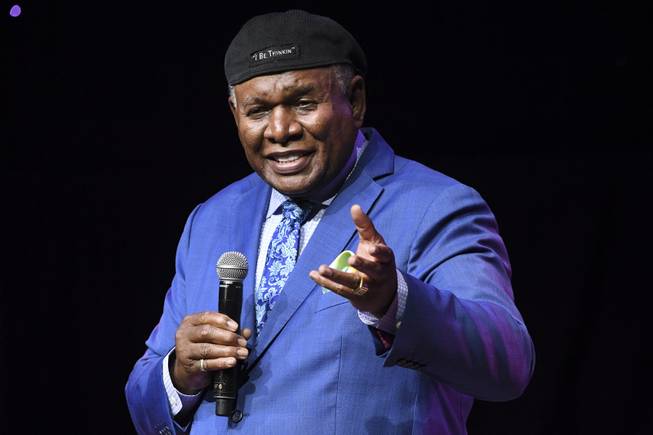 George Wallace performs the first night of a run of shows at the Westgate Tuesday, July 17, 2018.

In an interview recorded from the back room of Sid’s Café at Westgate Las Vegas on March 4, comedian George Wallace talks about his creative process, his show at the Westgate Cabaret, his social media strategy, his best friend Jerry Seinfeld and a multitude of TV and movie projects for this special episode of the Sun on the Strip podcast.

“I never wanted to do anything but what I do,” says the Southern-born comedian, whose career has spanned decades onstage and on-screen. “I love what I do and I’ve got the greatest job in the world [right here] in Las Vegas. I use it as a workshop. It’s also my sex and it’s my drugs when I go onstage, nothing is better.

“Chris Tucker and I were just talking about how great it is to go onstage every night. I’m blessed to be able to do new jokes, and if a joke doesn’t work, I kind of like it. I say, that’s a funny joke but the audience sucks. They love that.”

Wallace claims “I don’t know what I’m doing” when it comes to Twitter, but his account is definitely one of my funniest follows. And he’s trying out some new material in this interview just as he does on social media. He also explains the unique concept behind his upcoming Peacock Network show “Clean Slate,” shares his pick for the absolute top restaurant on the Vegas Strip and ponders the mysteries of discounted crackers.