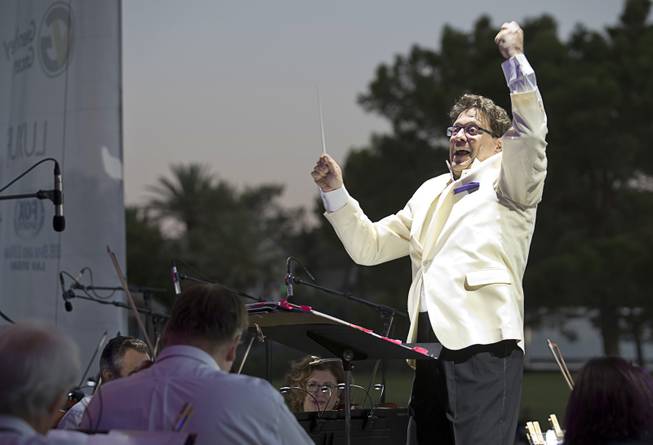 Donato Cabrera conducts the Las Vegas Philharmonic as they celebrate their 20th anniversary with the “Star-Spangled Spectacular,” an outdoor concert backed by fireworks, at TPC Summerlin Wednesday, July 4, 2018. The Vegas Golden Knights Foundation and Bank of Nevada were presenting sponsors.

Different kinds of musicians and artists are finding ways to bring their sound to an online audience during the pandemic, and the Las Vegas Philharmonic is no different. The LVP has partnered with the Space and Broadway World to launch a series of monthly showcase performances this week, pay-per-view livestream concerts starring some of its talented artists.

These curated chamber music concerts begin on Thursday with a performance by Christina Castellanos on flute and Lisa Maresch on piano, and music director and conductor Donato Cabrera will be there to host and discuss the program. The Sun recently checked in with Cabrera to find out how one of the city’s essential cultural organizations is holding up and moving forward these days.

You started a couple of projects very early into this whole pandemic thing in order to stay connected to the Phil’s audience and just keep thinking creatively. How are those projects going now?

Really for personal reasons more than anything else, because I felt a need to continue connecting with people who love what we do with the Las Vegas Philharmonic, I vowed to write a daily blog called “The Music Plays On,” and it wasn’t anything fancy but just a way to share my thoughts or a YouTube video of one of my favorite composers or artists or performers. It hasn’t been just classical music. I’ve written about Miles Davis and Beethoven, or about my favorite music documentaries or rock concerts. It’s something for me to keep my mind working every day. And the other thing was an interview with someone with the focus on arts and culture and how they relate on a personal level, and we do that once a week on Tuesdays at 1 p.m. It’s on my Facebook page and on the Phil’s Facebook page and YouTube channel. And then we also send out a newsletter every week with a link to past shows and blogs. These are the ways we are still providing content even though we can’t perform concerts.

The Philharmonic can’t perform traditional concerts but you are launching a series of six livestream concerts from the Space this week. How did this project come together?

It came out of a relationship Mark [Shunock] and I have. I had Mark on my interview show months ago, which is called “MusicWise,” and we talked about all his projects at the Space and less than a week later, he reached out about doing a project at the Las Vegas Ballpark. That hasn’t materialized yet but maybe in the future, and then a little later he reached out again to tell me about this partnership with Broadway World and how he wants to fill up the [calendar] with different shows and things and he thought of us. I really take my hat off to him for his creative thinking.

This is different music and a different style of performance than what we’ve seen at the Space so far. Are there specific challenges you’ve had to overcome for these shows?

Yes but the challenges are more COVID-related. If we want to showcase a woodwind player, we need to create more space around them than if it’s someone playing a non-breathing instrument. Other challenges are things like some of these musicians don’t live in Las Vegas, so how do we bring them in and where do they stay, non-musical challenges. But mainly, we still can’t meet as an orchestra and the Space is only [big enough] to present music meant for two or three or four musicians, which is not orchestral music but chamber music. So it’s just a matter of finding music that’s appropriate for who we’re bringing to play and it’s actually been a lot of fun to come up with these programs.

And the players themselves are much more involved in coming up with the program, right? That must be very exciting for the artists.

Absolutely. So the first [show] is a great example because the artist, Tina [Castellanos], who is our principal flute player, came up with the program entirely on her own. And it’s not just, I’ll play this then I’ll play that, some sort of hodgepodge. There’s a whole concept to how all the pieces fit together and a narrative she came up with to connect them. It’s just beautiful.

Even though you’re showcasing fewer artists, these concerts must be a really big deal for the morale of the organization right now.

We’ve been busier in the last few months trying to find other pathways to stay engaged with people, talking about new ideas and creating things, and now with these concerts being produced and coming to fruition, it’s wonderful to see everyone’s gears going into motion again. This is what we know how to do, to produce a concert, and even though people aren’t coming [to the Space], we’re still selling [pay-per-view] tickets and it’s wonderful to see that happening.

The Philharmonic has a spring series of concerts planned for 2021 and hopefully those events will be able to take place, but what other projects are you developing?

Besides these six concerts, we have a brand new membership [program] where we are providing streamed concerts called “Behind the Stand.” Those are different because they’re taped in advance and streamed to our burgeoning membership, and I host the event with two artists and introduce each piece. We have a couple other projects in the works we’re excited about but haven’t announced yet, and for education, we’re offering online materials as community support on our website [at lvphil.org/education].