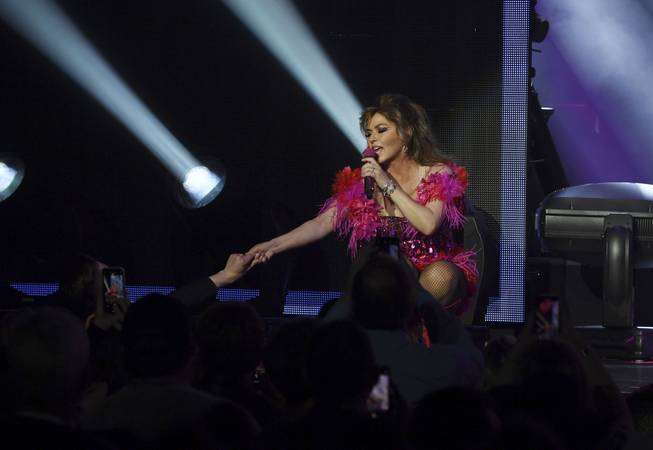 Shania Twain, one of many Vegas entertainers whose performances were canceled this month as the pandemic forced a complete shutdown of the Strip, is my special guest on the new episode of the Sun on the Strip podcast.

The country music superstar opened her second Vegas residency in December at the Planet Hollywood Resort’s Zappos Theater and performed there twice last week before the closures. She was still in Las Vegas as of Monday and making plans to get home to Switzerland with her family, dogs and horses.

“In a way, I’m at peace with the isolation,” she said. “I don’t know what it is but I’m feeling quite good … and very creative.”

Twain is constantly working on new music and said she is taking advantage of the unforeseen downtime to write and record. Last year she told me she was planning to release some new songs in 2020 and was looking forward to adding some to the “Let’s Go!” shows in Las Vegas.

“All you have to do is isolate me for two days and I’m creative. I’m a busybody person, a very productive person. I can’t get on the microphone enough. So I’m enjoying a lot of writing and a lot of singing. My whole day is only concentrated on husband, home, son, horses and dogs … oh yeah, and laundry and cooking,” she said with a laugh.

Twain hit the ground running when she opened her latest Vegas production, perhaps because she was building on her wildly successful “Still the One” residency at Caesars Palace from 2012 to 2014.

“I was already so at home in the room and at home with the show, and … the fans were in a real celebratory spirit,” she said of opening night. “I’m customizing the show very specifically for the unique audience that is here, because it’s a completely different personality than if you’re on tour. These are people that are mixed with locals but … from all over the world and there for various reasons. It’s a unique combination of fans and my role is to create a show that brings everybody into one focus, and that is to reminisce on the music they all know and grew up with.”

With hits spanning back to the 1980s, Twain has an audience that spans generations coming to Las Vegas to see the show.

“It’s only hitting me now because it took all this time to get there, but a lot of the couples that were married to my songs 20 or 25 years ago now have 20- or 25-year-old kids that grew up to my music,” she said. “So those kids are all grown up and they’re coming to party and celebrate, and their parents … are coming to celebrate getting married. I’m loving this whole reunion vibe that I’m feeling at my shows. It’s so real.”