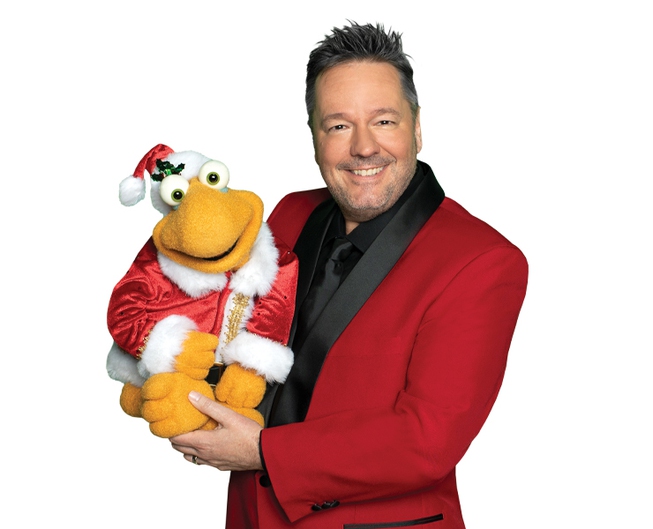 Everyone has their own opinion about the right time to turn on the Christmas music, but singer, ventriloquist and comedian Terry Fator thinks it’s never too early.

“I love the holidays and I already started listening to Christmas music [in early November],” says the headliner at the Liberty Loft at New York-New York. “I can’t get enough.”

Fator’s show is one of a handful of Strip casino productions shifting to holiday-themed performances this week. “A Very Terry Christmas” will find Fator and his cast of puppets filling the room with favorite songs and at least one original, “Christmas in Las Vegas,” starting on November 26 and running through January 1.

“That’s actually one of my favorites to perform, because I compiled a list of all the things Vegas is iconic for, and the things Christmas is iconic for, and put them together,” he says. “The first line is, ‘The neon lights shine like Christmas night.’ It has all those aspects mingled into a big band type of thing the Rat Pack might sing, and I open the show with that.”

Just across Tropicana Avenue, the Excalibur’s resident production “Tournament of Kings,” entertaining audiences with knights on horseback engaged in sword and jousting battles since 1990, returns to its annual “Twas the Knight” holiday edition from November 24 through December 27. Its equestrian arena transforms into a winter wonderland when Merlin the wizard summons snowfall, and holiday-inspired music, costumes and décor as well as special dance and horseback performances are all part of the transformation.

At Palazzo, an original holiday production created last year that wasn’t able to make its way to the stage due to COVID restrictions will finally be performed this year. “This Is Christmas” is produced by Pat Caddick featuring a stellar cast of Broadway and Vegas veterans and some “American Idol” alums too, like Diana DeGarmo, Jasmine Trias, Ace Young and Lou Gazzara. The mostly musical show runs November 26 through December 26 at the Palazzo Theatre.

“It was disappointing [last year] because we got so close to opening before we had to shut down, but we understood we were up against those obstacles, putting together a show when nothing else was happening,” says singer Jaclyn McSpadden, who returns to the cast this year. She’s also performed on the Strip recently with Brian Newman at NoMad Las Vegas and at Bellagio’s Mayfair Supper Club.

“For the most part, it’s a similar song list, but we’ve added a couple numbers with Diana and Ace [joining the cast]. We’re doing an a capella piece and there are excerpts from ‘Scrooge: The Musical’ in there as well. It’s a little bit of everything. And we close out with ‘Joy to the World,’ the version from ‘The Preacher’s Wife’ with the gospel choir.”

Off the Strip at the Smith Center downtown, the Broadway and West End production of “A Christmas Carol,” starring “West Wing” actor Bradley Whitford as Scrooge, will take the stage at Reynolds Hall for nine performances November 23-28. And later, Westgate International Theater resident headliner Barry Manilow turns his popular concert show into “A Very Barry Christmas” on December 2-4.