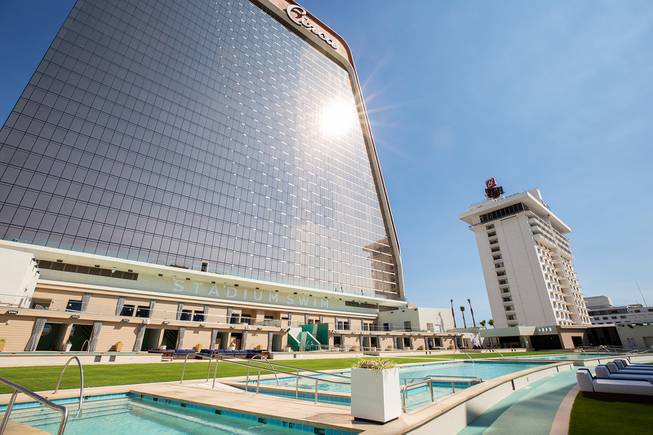 The Stadium Swim rooftop pool complex, seen during a media preview of Circa on Monday, Oct. 19, 2020, is one of the resort’s main attractions. 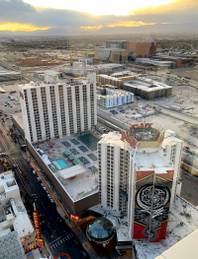 A view of the Plaza from Circa’s Legacy Club rooftop lounge.

The Legacy Club opened this week atop the 777-room hotel tower at the Circa Resort and Casino, and anyone who has experienced the outdoor space at the rooftop lounge knows the views are spectacularly unique, including a clear shot looking down at the 22-story Plaza Hotel and Casino across the street.

The Circa tower might be the best place to view the Plaza’s New Year’s Eve fireworks show, and that’s just one of the reasons the brand-new downtown casino property was selected to host KLAS-TV’s 27th annual “Countdown to New Year’s Eve 2021” live special, beginning at 9 p.m. Thursday on the local CBS affiliate Channel 8.

KLAS and Nexstar Inc. in 13 other cities across seven states will broadcast the live show to more than 16 million households and it can also be streamed at 8newsnow.com. The special will be hosted by local anchors Brian Loftus and Kirsten Joyce with San Diego sister station KSWB-TV’s Maria Arcega-Dunn from Circa’s Stadium Swim pool deck and the Legacy Club and will feature live musical performances from Las Vegas artists Zowie Bowie, Skye Dee Miles, Michelle Johnson and Sina Foley.

The Channel 8 broadcast will also include live reports from the Plaza and the Hard Rock Café on the Strip. While the typical multi-resort fireworks show on the Strip isn’t happening this New Year’s Eve, a portion of Las Vegas Boulevard will still be closed to vehicle traffic Thursday night.

At the STRAT, local resident and contest winner Ryan Smith will be celebrating the new year with an 829-foot leap off the SkyJump attraction clad in a custom-made mirror ball suit. The thrill rides at the STRAT’s SkyPod will be open to guests in the early morning hours of the new year for the first time due to the lifted fireworks restrictions typically enforced on the Strip.

And for a virtual twist on the standard Vegas New Year’s Eve party, the Las Vegas Convention and Visitor Authority’s VisitLasVegas.com site (along with the official Las Vegas Facebook and YouTube channels) will livestream a countdown to midnight featuring a performance by Tao Group resident DJ Vice and a massive LED 2021 sign to be revealed with an eruption of confetti, streamers and fireworks. The show begins at 11:30 p.m.