Cirque du Soleil’s original production (it opened in 1993, changing the face of Las Vegas entertainment forever) has lost none of its appeal or energy, especially now, returning after shuttering for more than a year.

As you walk into the theater, don’t be surprised if, once you’ve given your ticket to the attendant, you find yourself in the spotlight—literally. A clown, who wanders through the theater before the show starts, delights in pranking random audience members—maybe you! Maybe you’ll be directed to the wrong seat; or maybe you’ll take your seat and suddenly have popcorn spilled all over you. But whether it’s you or someone else, you’ll be laughing almost immediately, and you quickly become aware how much fun this show is going to be.

And Mystère never disappoints in the fun factor department, from the oversized baby looking for his “Papa” (he finds him, by the way, and again, you could be “Papa,” depending on where you’re sitting) to the reappearance of the clown throughout the performance, performing magic tricks and generally messing around with the other performers. 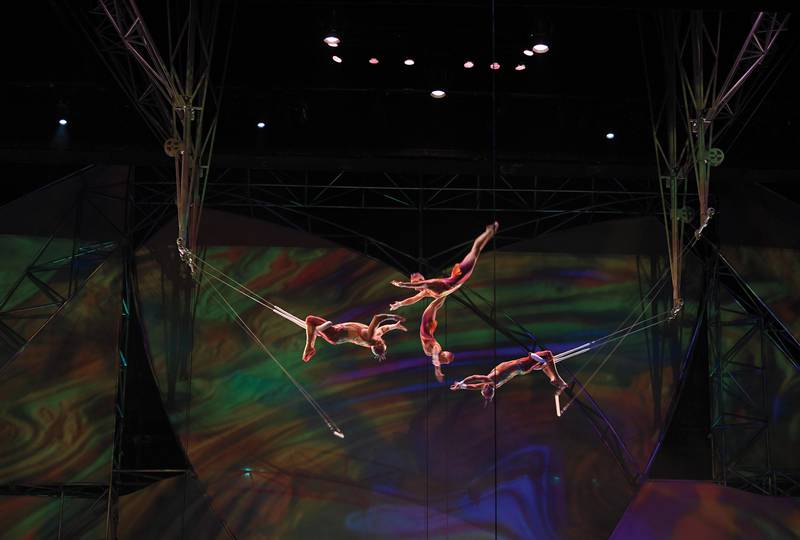 It’s a very loose framework around which Cirque has assembled some of the greatest athletes in the world, performing feats that will have you rethinking that Crossfit program: You’ll wonder if acrobats are defying gravity as they ascend poles effortlessly, then slide down, stopping themselves just before they hit the ground; as two strongmen hoist each other into impossible positions while slowly spinning on a raised stage, you’ll be holding your breath, as if your concentration will give them that bit of extra strength; and your adrenaline will be pumping as you watch acrobats propel each other up in the air on a see-saw, culminating in some truly dizzying heights.

With the closure of Ringling Bros. and Barnum & Bailey Circus in 2017, it’s getting harder to find classic circus performances. Luckily, Mystère is helping to keep these skills front and center for future generations. A thrilling trapeze routine has “dueling” aerialists mirroring one another as they fly from bar to bar, never missing a beat. Other aerialist acts high over the audience range from beautiful to gasp-inducing.

The opening-night performance seemed to imbue its cast with an extra burst of energy and enthusiasm. Even the host—an iconic part of the proceedings, accompanied by an orange puppet who seems inspired by The Beatles Yellow Submarine movie—seemed to appreciate the significance of the moment. As he announced Cirque’s new tagline, “Intermission is Over!” the audience responded enthusiastically, a pattern repeated throughout the evening. A thunderous standing ovation at the end seemed to truly touch the performers. Anyone wondering whether live entertainment was missed in Las Vegas got their answer that night.