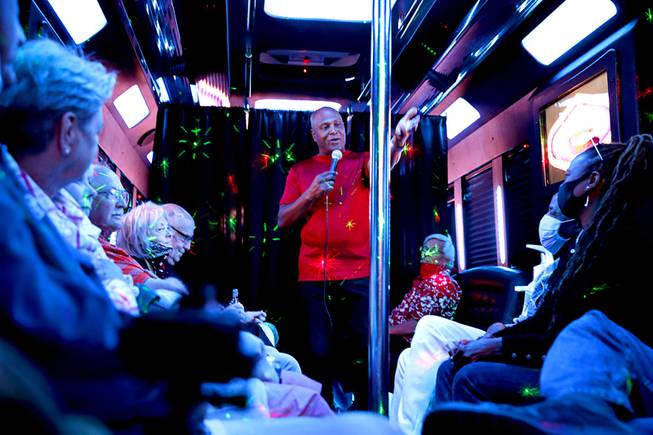 After comedian Joseph Wiley’s cruise ship gig ran aground during the pandemic, he decided to take his show on the road — literally.

Now, instead of entertaining 500 people a night on the high seas, he’s yucking it up for small groups aboard a party bus in Las Vegas.

Welcome to the SmileyJoe Wiley Comedy on Wheels tour, where groups of 10 to 15 people get an intimate show on a 45-passenger bus with comfy leather seats and an out-of-place stripper pole that begs the question of what other kinds of shows have taken place on this bus.

“It’s just like you walked into a comedy club,” Wiley said.

At a recent show, Wiley started his routine talking about the weight he has gained during the pandemic.

It’s gotten so bad, he said, that he doesn’t even like to take off his shirt when he showers. But “it’s cute,” he quickly adds, rubbing his protruding belly.

On the cruise ship, Wiley has entertained guests from all over the world, he said. “So now I feel it’s my time to come home and give Vegas some of what I’ve been giving other people,” he said.

Wiley hasn’t done a cruise ship show since the onset of the pandemic in March and doesn’t know if he’ll ever go back.

“I’m looking forward to making my show a success, so I can stay home and then retire from the sea,” Wiley said.

Since August, Wiley has done 18 shows on the bus, which he rents. Guests get custom SmileyJoe Wiley face masks to wear.

On this night, he picked up the audience at a Henderson casino and drove to a nearby parking lot. He likes to wait for the bus to stop before beginning his 30-minute act.

“This is the first time I’ve been out of the house in a year,” said Marie Harkness, a passenger dressed in a flashy, sequined top and sipping a mini bottle of wine.

One passenger lightened the mood as soon as he got on the bus by taking a spin around the stripper pole.

Bus driver Anthony Lale said he never heard of a comedy show on a party bus before, but he liked it.

“It was refreshing. It’s better than just hearing loud music,” he said.

Wiley’s wife, Aleksandra, whom he met when she was a cruise ship waitress, passed out drinks, SmileyJoe Wiley magnets and foam drink coolers.

Wiley is originally from Cleveland and moved to Las Vegas in 2004. Inspired by Eddie Murphy, Wiley started doing stand-up at small open mic nights in Cleveland in 1991. Eventually he started getting gigs at local comedy clubs.

He was a financial officer in the mortgage industry before he quit for odd jobs and comedy full time.

In 2001, he appeared on BET’s ComicView, which was filmed at the Opheum Theater in New Orleans.

Eventually, Wiley met a cruise ship comedian who helped him get a job with Carnival Cruise Line.

With coronavirus deaths, shootings and civil unrest in 2020, Wiley said he thinks comedy is more important than ever.

“My main goal is to keep everybody happy. The best medicine right now is laughing,” he said.

For more information or to book the SmileyJoe Wiley Comedy on Wheels bus, go online to keeponsmilen.com.