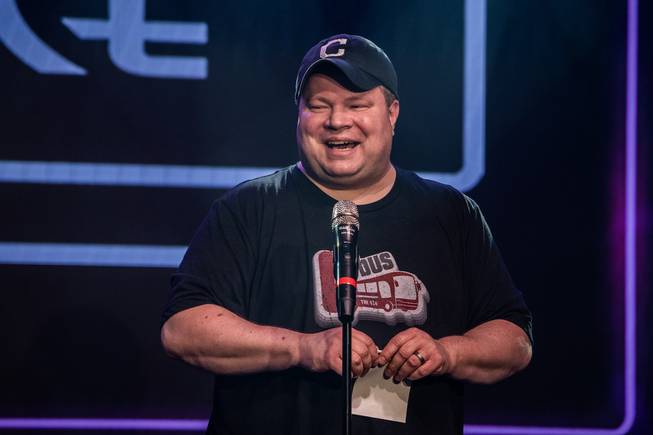 John Caparulo will be performing live at the Space once again on May 11.

Harrah’s Las Vegas headlining comedian John Caparulo decided to walk another path when his show and touring gigs were put on hold last year. Instead of turning to virtual stand-up shows with audiences connected via Zoom or other platforms, the Ohio-born entertainer kept working on developing his unique animated comedy project, “Cartoon Comic,” which can now be seen on YouTube, Facebook and at johncaparulo.com.

“I can’t draw, which is why it took so long,” he jokes on this week’s episode of the Sun on the Strip podcast. “But I’ve been wanting to turn myself and my stand-up comedy into a cartoon for a while, so when live audiences were essentially illegal, this was adaptable to the situation.

“It’s a unique approach because the thing about doing shows on Zoom is, it just seemed like the type of thing I would feel bad about taking people’s money for. It’s just not the right setting for me. I need some sort of energy and the animation gives you something more to watch.”

When the time came to get back onstage again, Caparulo found a temporary home in Las Vegas while waiting for his “Mad Cap Comedy” residency to reactivate at Harrah’s. He’ll perform at the Space just off the Strip for the third time on May 11, a very different style of show that plays on audience interaction.

“Once I knew I wasn’t going to be able to go and do a new hour of stand-up every month, I went to this thing I’ve wanted to try for a long time. So we’re passing the hat around to the live audience and they write down some suggestions for topics, and we try to keep it to five words or less, then I go onstage and just wing it,” Caparulo says. “It’s really fun because it’s interactive, the audience feels invested in it and it’s fun for me because I get to see where it goes. And if the show sucks, it’s their fault!”

He recently relocated to Las Vegas to focus on his Strip show but also because he’s found the city and the scene to be creatively nurturing. Caparulo has been playing clubs across the country for years and few cities can offer the atmosphere and lifestyle Las Vegas can.

“Before the last few years, I don’t think someone could take Vegas as a place to get started [in comedy],” he says. “When you have a lot of places and comics, it creates an artistic colony vibe and that’s really essential to developing comedy at all stages of the game.”