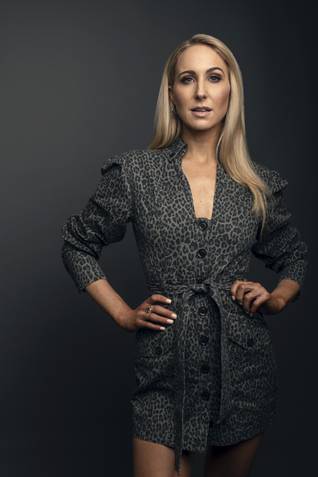 Nikki Glaser returns to the Mirage Theater this weekend.

Nikki Glaser became one of the top names in stand-up comedy because she forced it. She said she recognized early on that she needed to conquer an extreme fear of speaking in public and being in front of crowds.

“I had extreme stage fright growing up as a child,” Glaser said on this week’s Sun on the Strip podcast. “I’ve only been able to conquer my fears by doing the scariest thing possible. I’m someone who just jumps into the pool, I don’t go by the ladder and ease my way in.”

As a kid, that meant trying out for a school play. As one of the most acclaimed comics of her generation — and one of the most consistent comedy podcasters out there — Glaser has continued to take risks and push boundaries whether she’s onstage or developing a new project.

Her “One Night with Nikki Glaser” tour brings her back to the Las Vegas Strip this week to perform at the Mirage Theater on September 17, the perfect place to continue to hone a razor-sharp set she’ll be drawing from for a TV special to be filmed later this year.

“This whole tour I’ve been building the act and figuring out what it is I want to say, and this show is perfect timing because there is the right amount of flying by the seat of my pants, but I know where the jokes are,” she said. “It’s not too regimented but I know what I want to say and I know the jokes I do have are great, so any that come up in the moment — which is inevitable in Vegas because everyone is processing their surroundings and reacting to how different everything is — will be cool because I’m at a point where I can trust myself to play with the audience and go off on tangents.”

Glaser’s confidence is partially fueled by the summer success of a reality TV dating show she hosted and produced, “FBoy Island” on HBO Max.

“In terms of television, I’ve never been so trusted to be me and not have someone tell me what to do. There were no notes,” she said. “So I felt really comfortable developing a new style of hosting a reality TV show in which I make fun of the genre and the tropes  and how ridiculous it all is while also being very sincerely invested in the relationships that develop.”