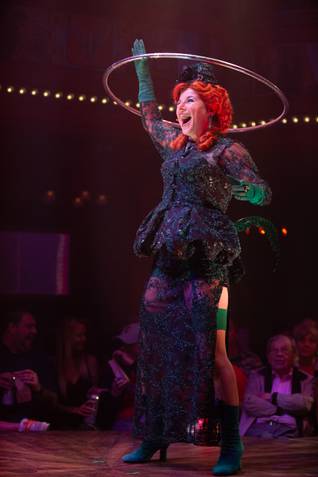 There’s only one way for Petra Massey to describe the feeling of returning to the stage after more than a year away from her Las Vegas Strip gig in “Atomic Saloon show” at the Grand Canal Shoppes — it was a pure adrenaline rush.

“I felt like a bottle being uncorked,” the British comedian and actress says on this week’s episode of the Sun on the Strip podcast. “I get adrenaline rushes anyway when I do new material and new shows, or trying something new for the first time, but the rush I got after 13 months of not doing any shows or any kind of performance, it really hit me. It was amazing. I’m just so excited to be back onstage and I feel so privileged and so lucky.”

Massey first performed in Las Vegas almost 18 years ago when she brought her comedy crew SpyMonkey to help open Cirque du Soleil’s “Zumanity.” She returned in 2019 for Spiegelworld’s “Atomic,” a hilarious variety show with a wild west theme. The show was only open for about six months when the pandemic put a halt to live entertainment last year.

“It was like a freeze frame. Everything stopped,” she says. “And we didn’t have much of a foundation to cling onto, so we all clung onto each other. The artist community in Las Vegas really came together and Spiegelworld was very supportive.”

She found more support from the Mojave Springs School, where her son attends classes. She was offered some volunteer work and ended up becoming an outreach facilitator and games teacher for five months. Massey says it helped “just for my sanity” as she navigated the uncertainty of when she might return to work performing on the Strip.

“I didn’t realize how much I missed the stage because I just got on with it,” she says. “I went into survival mode. So to be back almost feels otherworldly, like a little bit of a miracle. It feels like we’re starting something, pioneering the way in a very safe way.”

And she’s found comfort in returning to the rule of Boozy Skunkton, the emcee of the show and the proprietor of the fictitious Atomic Saloon.

“I’ve really fallen in love with her, but she’s me. When you work in clowning, it’s kind of like the heightened version of yourself,” Massey says. “In one sense she’s like a ferocious dog, and in another she’s this vulnerable little piglet who desperately wants to be loved but isn’t quite sure, she doesn’t know how. But she’s an ongoing, longstanding love affair for me and I do enjoy playing her every day.”