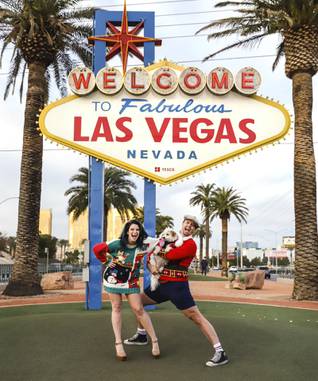 Jordan Kai Burnett and Asher Treleaven are ready to welcome you back to Las Vegas.

Las Vegas performers Asher Treleaven and Jordan Kai Burnett, newly engaged as of December, are both comedians at heart but have plenty of other skills in their entertainment arsenals; if they didn’t, they wouldn’t be such significant parts of prominent Strip production shows.

Treleaven, an experienced circus artist and street performer in his native Australia, was performing at the Edinburgh Festival Fringe in Scotland when he discovered by Spiegelworld and recruited to join the opening cast of “Opium” at the Cosmopolitan.

“They really ride a dialectic between being extremely well thought-out and well-executed, but also very spontaneous and risky, which is kind of great,” he says about the company on this week’s Sun on the Strip podcast. “And in the variety world, with so many different types of acts and so many different people from different communities and places around the world, the way you need to operate to cast multiple shows is really difficult.”

Treleaven is currently performing in Spiegelworld’s “Absinthe” at Caesars Palace until “Opium” returns to its stage. His fiancé Burnett is playing the waiting game as well, staying stage-ready for the grand reopening of “Magic Mike Live” at the Sahara in August.

Also a singer, musician and actress who has peformed with the storied Upright Citizens Brigade and the Groundlings, she emcees “Magic Mike,” an experience unlike any other role she’s had in the past.

Both performers have fought their way through the challenges of the pandemic over the last year and both are incredibly grateful to be able to work again.

“Going back to work after a long period is an intense process. It’s like, who am I? Am I still good? Are people still gonna like me? My internal dialogue is always: Guess what? People have decided in the interim break they hate you so much, but you’re only going to find out when you get onstage,” Treleaven says with a laugh.

Artists like these two have continued to work on different projects during the downtime, but there’s nothing like being live onstage.

“There have been some opportunities … and I’ve recorded a couple demos and it’s all terrific, and I’m grateful for the work, but the hardest thing is missing the actual work, which for me is going to a place and doing it in front of humans,” Burnett says.