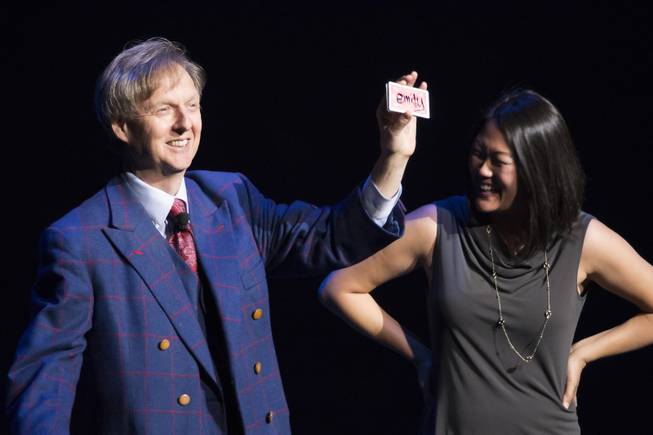 Comedy magician Mac King performs with an audience member during the Vegas Cares benefit concert at the Venetian Theatre in the Venetian hotel-casino at 3355 S. Las Vegas Blvd in Las Vegas on Sunday, Nov 5, 2017. The concert was sponsored by a group of Las Vegas entertainers, producers and business professionals to honor the victims and first responders from the 1 October shooting tragedy.

Mac King has been performing two afternoon shows a day, five days a week at Harrah’s Showroom for as long as you can remember; January will mark 19 years for the Kentucky-born entertainer at the center-Strip casino resort.

And while he may still be making goldfish disappear, he’s not going anywhere any time soon. King just signed on to stay at Harrah’s into 2023.

“I still really like it. And our daughter just started college this past week so I figure I should keep working,” jokes the affable illusionist.

When he started at Harrah’s — at just about the same time as his friend Clint Holmes, who now performs with Earl Turner at Westgate Las Vegas — there were few other shows operating at 1 and 3 p.m. like The Mac King Comedy Magic show. Afternoon offerings on the Strip have fluctuated throughout his tenure and there are a few options these days, but none have been around as long as King’s.

His first Vegas gig was at the Maxim (now the Westin), where he was two months into a two-year contract when the casino closed. But executives from Harrah’s caught his family-friendly, throwback act and planted him on the Strip.

“They’ve been really great to me and I’ve been really happy there. It’s changed a lot since when I first started there,” King says. “I’ve had a bunch of different bosses over almost 20 years and they’ve all be easy to get along with. I think the longevity comes from what people notice when they see the show, which I hope is that it’s still really fresh every time and it seems like the first time. When I’m working on something new I always leave room for people to react, and for me to react. That’s what keeps me on my toes.”

King may be performing some old-timey tricks — both grandfathers were amateur magicians, after all — but there are plenty of surprises and laughs packed into his show. He jokes about keeping production costs low (“It’s just me and a guy in a bear suit.”) but specializes in getting the most out of his materials. While the Strip keeps getting bigger and bolder in its entertainment offerings, there are very few shows serving families of all ages for a reasonable ticket price. In that category, the Mac King Comedy Magic show is simply a must.

“One thing I’m proud of is that it’s not just a series of magic tricks,” he says. “There’s a specific order and the stuff that comes later refers back to earlier stuff. There are all these loose ends that get tied up, all these callbacks and self-referential things. So the hard part is how to figure out what to take out when I put something new in. It’s all so intertwined.”

One could say this performer is similarly intertwined with the Strip, that things would feel out of order if he wasn’t onstage at Harrah’s most afternoons.

The Mac King Comedy show is performed at 1 and 3 p.m. Tuesday through Saturday at the Harrah’s Showroom at Harrah’s Las Vegas (3475 Las Vegas Blvd. South, 702-777-2782) and more info can be found at mackingshow.com.