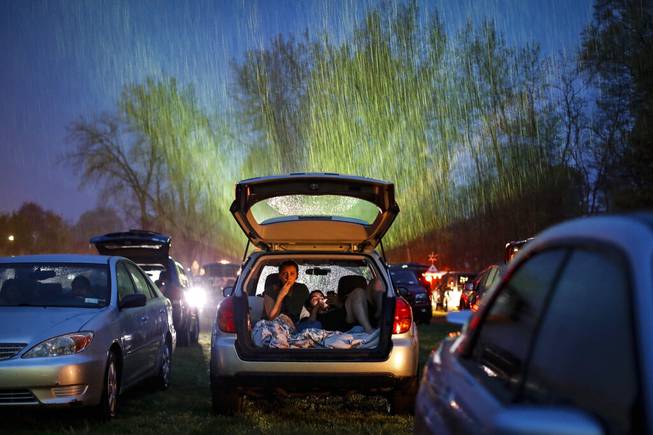 Guests watch “Trolls World Tour,” in the rain at the Four Brothers Drive In Theatre amid the coronavirus pandemic, Friday, May 15, 2020, in Amenia, N.Y.

BRISBANE, Australia — Australians headed out to eat for the first time in weeks Saturday, but the reopening of restaurants, pubs and cafes came with a warning: don’t overdo it.

Public heath experts are urging caution as governments ease restrictions on eateries, shops and parks in many countries and roll out measures to restart dormant factories. The coronavirus pandemic, which has killed more than 300,000 people, has slowed in many places but could pick up again if precautions aren’t taken or officials move too quickly to get people back to work.

“The message is, yes, appreciate all the efforts, appreciate the opportunity to release some of those measures, but let’s not have a party, let’s not go to town,” said Tony Bartone, president of the Australian Medical Association.

Most restaurants are limited to 10 customers at a time, and Bartone said people must maintain social distance, follow coughing etiquette, wash their hands regularly and stay away from others if they are ill.

In the United States, an Associated Press analysis found that 41 of the nation’s 50 states fall short of the COVID-19 testing levels that experts say are necessary to avoid another wave of outbreaks, even as some of those states move aggressively to allow businesses to reopen.

Rapid, widespread testing is considered essential to tracking and containing the coronavirus. The AP analysis is based on metrics developed by Harvard University’s Global Health Institute.

Harvard researchers have calculated that the U.S. needs to test at least 900,000 people daily to reopen the economy safely, nearly three times the current tally of about 360,000, according to figures compiled by the COVID Tracking Project website.

Among the states falling short are Texas and Georgia, which have reopened shopping malls, barbershops and other businesses.

“I really do feel there are dangers here to opening up without enough tests, but I don’t feel it’s a uniform danger everywhere in the country,” said.Dr. Ashish Jha, director of Harvard’s Global Health Institute.

New York state is moving more cautiously. It will allow smaller cities and rural regions spared the brunt of the outbreak to reopen first. The first wave will include retail — though only for curbside or in-store pickup — along with construction and manufacturing. Gov. Andrew Cuomo also said beaches would reopen in time for next weekend’s Memorial Day holiday.

Hawaii authorities arrested a 23-year-old tourist from New York who allegedly posted photos on Instagram of himself at the beach, in apparent violation of a mandated 14-day quarantine for arriving travelers. People who saw his social media posts reported him to authorities.

In South Korea, which has one of the highest levels of testing, a Health Ministry spokesman said Saturday that the country may have dodged a major outbreak after finding 162 cases linked to clubgoers in Seoul, the densely populated capital.

Son Young-rae said 46,000 people have been tested in the club-related outbreak.

“It’s notable there were no new transmissions in churches, call centers and gyms where virus carriers went to,” he said, adding it was a sign that facilities and businesses are practicing proper hygiene and enforcing distance between people.

India overtook China in the number of confirmed infections as Prime Minister Narendra Modi’s government is due to announce this weekend a decision whether to extend the 54-day-old lockdown. India counted 85,940 infections and 2,752 deaths compared to China’s 82,941 confirmed case and 4,633 fatalities.

China is shortening its annual legislative session, which begins late next week in Beijing, as small clusters of cases pop up elsewhere in the country. The spread of the disease has largely stopped in the country where the pandemic started, but Jilin province in the northeast has reported 28 cases over nine days, the latest two on Friday.

In Mexico, the number of new confirmed cases hit a new daily high Friday, even as the government clarified guidelines for the construction, mining and automotive industries to start returning to work Monday.

The country recorded more than 2,000 cases for the second straight day, suggesting its outbreak has yet to peak. President Andrés Manuel López Obrador, straddling the issue, said Friday that “we have to be more careful, not relax the discipline.”

In a sign of the severity of the economic fallout, particularly on global travel, Air Canada said it plans to lay off at least 20,000 of its 38,000 employees effective June 7. Canada’s largest airline said COVID-19 has forced it to reduce flights by 95%.

Singapore Airlines said Friday that traffic in April fell 99.5% from a year earlier. Even after cutting service by more than 95%, its average flight was only 9% full.