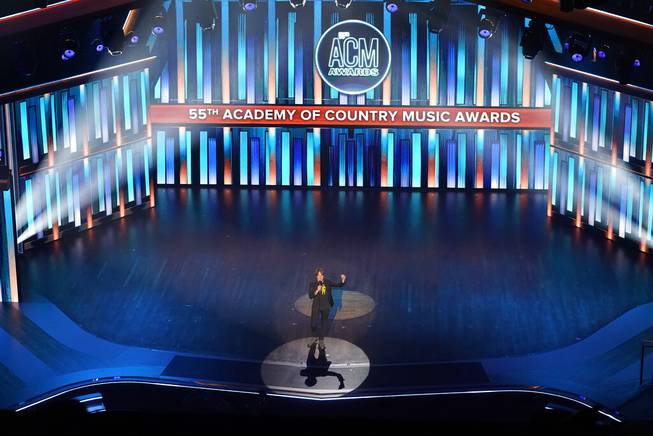 NASHVILLE, Tenn. — Country music’s top entertainers kicked off the Academy of Country Music Awards with a medley of their hits from three empty music venues around Nashville after the show relocated from Las Vegas.

Luke Bryan, Eric Church, Luke Combs, Thomas Rhett and Carrie Underwood, all vying for entertainer of the year, sang to empty seats and no applause at the Grand Ole Opry House, the Ryman Auditorium and the Bluebird Cafe. The show was delayed from April due to the COVID-19 pandemic and the tone for Wednesday’s show airing on CBS will be more serious that in years past.

Host Keith Urban noted all the changes this year for the show and for the country in general, saying 2020 has been an “unpredictable and unsettling year.” After noting wildfires on the West Coast, hurricanes in the South, Urban said the country is battling two pandemics: COVID-19 and social injustice.

“Far too many lives have been lost to both,” he said. “But the examples set by essential workers, our first responders, along with the voices crying out for equality in all walks of life, have echoed around the world and right here in our country community.”

The show will feature performances by Taylor Swift, Carrie Underwood, Keith Urban, Luke Bryan, Blake Shelton with Gwen Stefani and many more, but it’s being rebranded as a “night of heart and hits” that will also reflect how hard the pandemic has hit many people this year, especially in the music industry.

Trisha Yearwood will perform a memorial tribute performance that will likely include Kenny Rogers, Joe Diffie, Charlie Daniels and John Prine, who all died in 2020. Country singer Mickey Guyton’s performance of “What Are You Gonna Tell Her?” will highlight food insecurity. The ACMs will also showcase their charity contributions to unemployed workers in the music industry.

Leading nominees include Dan + Shay, Old Dominion and Maren Morris, and all eyes will be on the entertainer of the year category. Underwood, who won the category in 2008 and 2009, seems a likely frontrunner after many feel she was overdue for an entertainer of the year win at the other major country awards show, the CMA Awards, last November.

Swift, who makes her first return to the ACM stage in seven years, was the last female artist to win ACM entertainer of the year in 2011.

Combs, who earned his first entertainer of the year nomination this year after winning new male artist of the year last year, could prove to be an upset after amassing incredible streaming numbers with his first two records and hitting the top of Billboard’s country radio chart for nine consecutive singles.

The eligibility period for this year’s show was calendar year 2019 and voting ended before the pandemic hit, so the awards being handed out this late in the year may sound a little older than what is currently trending in country music.

Miranda Lambert, already the most awarded artist in ACM history with over 30 wins, looks to extend her five-time win streak in the album of the year category with her record “Wildcard.” But the crossover success of Maren Morris’s album “GIRL” is also likely appeal to voters this year.

Grammy winners Dan + Shay have a chance to bring home an ACM award for pop star Justin Bieber in the song of the year category for “10,000 Hours.”