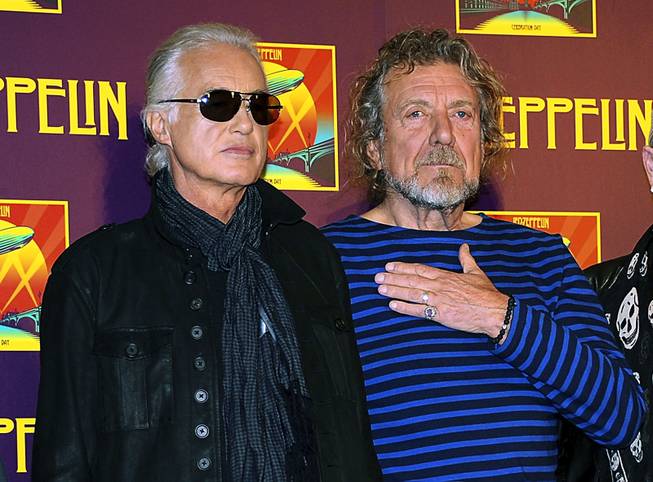 In this Oct. 9, 2012 file photo, Led Zeppelin guitarist Jimmy Page, left, and singer Robert Plant appear at a news conference ahead of the worldwide theatrical release of “Celebration Day,” a concert film of their 2007 London O2 arena reunion show, in New York. A panel of 11 judges from the 9th U.S. Circuit Court of Appeals agreed Monday, June 10, 2019, to hear Led Zeppelin’s appeal in a copyright lawsuit alleging the group stole its 1971 rock epic from an obscure 1960s instrumental.

SAN FRANCISCO — “Stairway to Heaven” will get another hearing, this time to a packed house.

A panel of 11 judges from the 9th U.S. Circuit Court of Appeals agreed Monday to hear Led Zeppelin’s appeal in a copyright lawsuit alleging the group stole its 1971 rock epic from an obscure 1960s instrumental.

In a 2016 trial that included testimony from Led Zeppelin guitarist Jimmy Page and singer Robert Plant, a jury found that “Stairway to Heaven” did not significantly resemble the song “Taurus,” written by the late Randy Wolfe and performed by his band Spirit.

Page said he wrote the music for the song and Plant the lyrics, and that both were original.

But in September, a three-judge panel from the 9th Circuit ruled that the judge at the trial had failed to advise the jury properly, and ordered a new trial. The judges unanimously found that the trial judge was wrong to tell jurors that individual elements of a song such as its notes or scale may not qualify for copyright protection, because a combination of those elements may qualify if they are sufficiently original.

Led Zeppelin’s lawyers moved to the next level of appeal, asking for the larger group of judges to rehear the case, and the request was granted. The 11-judge panel will hear the case in late September in San Francisco.