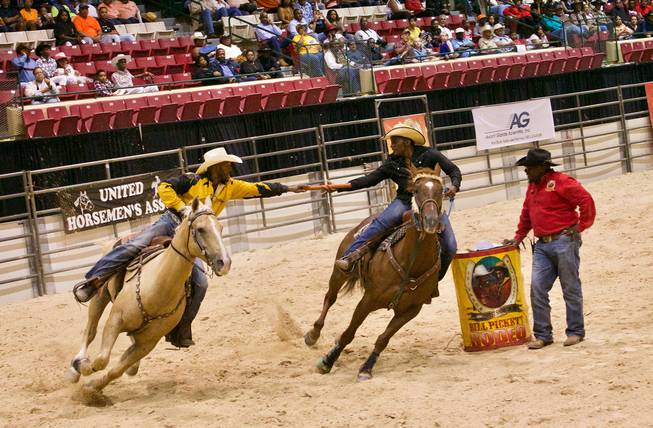 Many of Valeria Howard-Cunningham’s favorite moments over more than three decades spent around Bill Pickett Invitational Rodeo, the all-Black circuit her late husband founded in 1977, have involved demonstrations introducing the sport and the organization’s history to children.

Howard-Cunningham, now BPIR’s CEO, always positions herself at the front of the arena before the start of the “Rodeo for Kids’ Sake” sessions, so she can witness newcomers’ reactions. And she has become used to hearing one takeaway repeatedly over the years.

“I’ve heard so many of them say, ‘Oh, my God, we’ve never seen this before on television. There actually are Black cowboys and cowgirls,’ ” Howard-Cunningham says.

There might be fewer of those shocked first impressions after a historic rodeo weekend scheduled for June 11-13 in Las Vegas. As part of its new partnership with Professional Bull Riders, BPIR will make its network television debut Sunday afternoon on CBS as a capper to a three-day extravaganza at MGM Grand Garden Arena.

PBR stages its annual Las Vegas invitational on the first two nights before ceding the stage to BPIR’s “Showdown in Vegas: Challenge of the Champions.”

“They’ve been doing great things in supporting Black cowboys and the sport of rodeo, and we thought we were in position to help them take what they’ve been doing to a new level,” PBR CEO Sean Gleason says. “If you look back at the history of cowboys, it was the first true melting pot of American society. It was white settlers moving to the West, Black free men moving to the West and all them learning the craft and trade of the true cowboy out to the railheads, and learning from the Hispanic vaqueros. … We’re truly a sport of diversity. and I think embracing that, as we have all along, and expanding it is only going to help the entire sport grow.”

It’s a historic return to Las Vegas, which has traditionally hosted two PBR events per year—including November’s World Finals—but went all of 2020 without any amid the pandemic. The World Finals left Las Vegas for the first time in its 26-year history, decamping to AT&T Stadium in Arlington, Texas, after it couldn’t get approval for fan attendance here.

Some feared the event, which creates millions of dollars in economic impact and drew nearly 75,000 fans over its three days in 2019, would leave Las Vegas forever, but Gleason said PBR remained committed to the area.

“I made it perfectly clear to [Las Vegas officials] that we would be back there the minute we could,” Gleason said. “We took a chance that things would be open in early June, and here we are going into the event with 100% capacity.”

The PBR Invitational will feel like even more of a “homecoming,” according to Gleason, with the move to MGM, which hosted the PBR World Finals from 1994 to 1998 before it moved to the Thomas & Mack Center for 20 years.

BPIR’s history in Las Vegas is less extensive. Howard-Cunningham said the organization visited once in the early 2000s and had a successful event but soon found itself “priced out” and unwanted. Unfortunately, she says, that’s been a common theme for BPIR through the years.

PBR is often regarded as one of the country’s fastest-growing sports franchises, but Gleason is still pushing for more expansion, explaining that it could come from underrepresented demographics in rodeo. In addition to the BPIR partnership, PBR unveiled the new Women’s Rodeo World Championship last year.

“We’ve got a very diverse batch of bullriders,” Gleason says. “We’ve got competitors from multiple countries, multiple backgrounds who compete. Bullriding and the sport of rodeo are really the great equalizer in terms of competition. The bulls don’t care where you came from, what race you are or what your economic outcome is. They’ll treat you the same regardless. It’s a great sport for athletes from all walks of life.”

That’s a message similar to the one Howard-Cunningham has preached repeatedly since taking over BPIR’s operations. She wasn’t initially sure she would keep running the rodeo after her husband, Lu Vason, died in 2015, but she says she felt motivated and obligated after so many fans reached out to her.

To bring BPIR to its biggest stage six years later with the help of PBR is something she feels like “doing backflips over. I’ll be honest, I didn’t know the parameters of the impact after his passing, but I’d go out to a rodeo and people would be sharing, pleading, crying, just saying, ‘You’ve got to keep doing this,’ ’’ Howard-Cunningham says. “It meant something, and I couldn’t take that away from this community.”