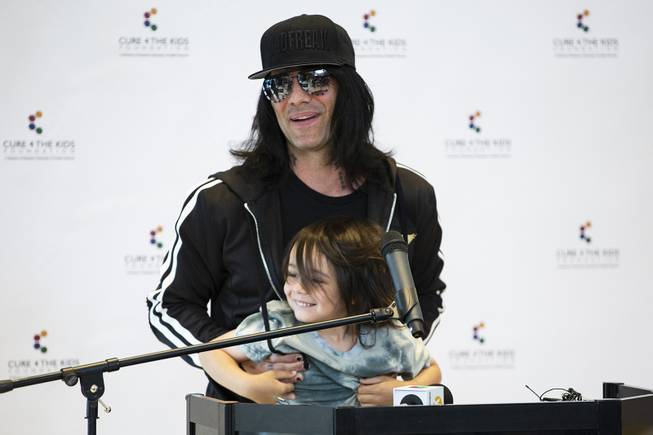 Criss Angel invites his son Johnny Crisstopher to speak during an event to reveal a Criss Angel-themed patient exam room sponsored by the illusionist at Cure 4 The Kids Foundation Thursday, May 9, 2019.

Las Vegas Strip headlining magician Criss Angel has been spending a lot of time lately at the Cure 4 The Kids Foundation’s local clinic where his son Johnny Crisstopher has been undergoing treatment in his ongoing battle with leukemia. Last week’s visit was a special one as Angel’s foundation teamed with The CORE Group, Caesars Entertainment, BASE Entertainment and Woodland Scenics to make a donation worth more than $250,000 of food and entertainment to help other Cure 4 The Kids families battling pediatric cancer.

“If you consider pediatric cancer by itself, it’s a big threat. You’re battling life and death every day and these children have to go through treatment, try to recover and get well and get through this diagnosis,” Angel says on the latest episode of the Sun on the Strip podcast. “We’ve all been practicing social distancing and hand-washing and sanitizing different areas now, and I’ve been doing these things with my family since Johnny Crisstopher was first diagnosed. Now we all understand what that’s like.

“But this is a triple threat for these families. Not only are they dealing with the vulnerability of pediatric cancer and how COVID can be deadly for children who have immune systems that are compromised, on top of that you have parents who have been laid off from work and are trying to figure out how to put food on the table. That’s why we felt a real call to action to do something to alleviate these pressures.”

Those interested in making a donation to the Johnny Crisstopher Children’s Charitable Foundation to raise awareness of pediatric cancer and provide funds for research and treatment can do so at crissangel.com/donations.

On this new podcast, Angel also talks about the recent passing of Roy Horn, who teamed with Siegfried Fischbacher to create one of the most iconic productions in the history of Las Vegas entertainment.

“If there were no Siegfried & Roy, there would be no David Copperfield, no Penn & Teller and no Criss Angel. They were the ones that led the way, that transformed Las Vegas into what it was, a world that families could come to, and they have become an institution because of their contributions to magic and to Las Vegas,” Angel says. “They changed the trajectory as we knew it. That’s why Cirque du Soleil was born in Las Vegas with Steve Wynn, who had a winner in Siegfried & Roy and saw the possibility of how entertainment that’s unique and different can drive people and engage people.”

Angel describes how Siegfried & Roy generously became magical mentors as he was developing his act and preparing a show of his own in Las Vegas, how they gave advice and assistance freely “and they didn’t have to. They were just trying to help and guide me.

“When I used to come to Las Vegas and see the show in the ’90s and see their commercials on the tram, it was a fantasy, what I had in my head of what their life must be. They’d get dropped off in a Rolls-Royce, sip Champagne, do this spectacular, sophisticated show, then get off stage and they’d have parties. Then when I was blessed enough to get a show, I actually did end up getting a Rolls-Royce because of Siegfried & Roy, but I never ended up using it because it wasn’t that life at all. It was all about hard work and about remaining relevant with your craft, and I learned that as I got to know them.”